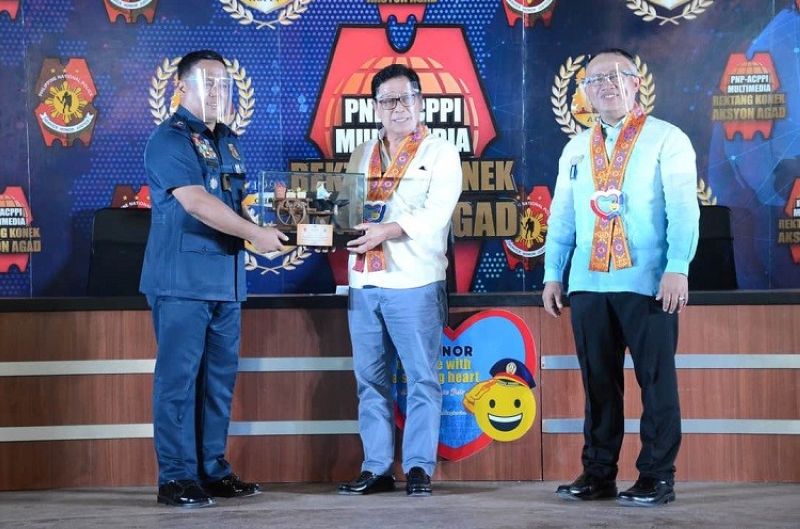 Bello personally conferred the awards to deserving Philippine National Police (PNP) personnel and other stakeholders who have contributed immensely to the success of Rektang Konek Aksyon Agad.

RKAA is a multi-media interactive program of the PNP which enhances the image-building capability program of different government agencies by providing quick public services to the Filipino Community, both local and abroad and being aired simulcast from Monday to Friday, 12:30 p.m. to 2:00 p.m. at the RKAA Studio, Legal Service Building in Camp Crame, Quezon City and at the Rektang Konek Studio, PRO-Central Luzon Makatao Hall in Camp Captain Julian Olivas, City of San Fernando, Pampanga.

Prior to the program for the RKAA anniversary, the signing of the deed of donation and ceremonial turn-over of the firetruck was held followed by the commencement of construction of the PRO-Central Luzon Bayanihan Multi-Purpose Center with Patrol Party List Representative Jorge Antonio P Bustos, and the unveiling and commencement of construction of PRO-Central Luzon KOI pond with Pampanga Fourth District Representative Juan Pablo "Rimpy" P. Bondoc.

PRO-Central Luzon Director Police Brigadier General Rhodel O. Sermonia said that as RKAA continues another year of genuine and dedicated service, all stakeholders are enjoined to support the PNP in building safe and progressive communities. (PR)