Labor on Sona: A threatening rhetoric 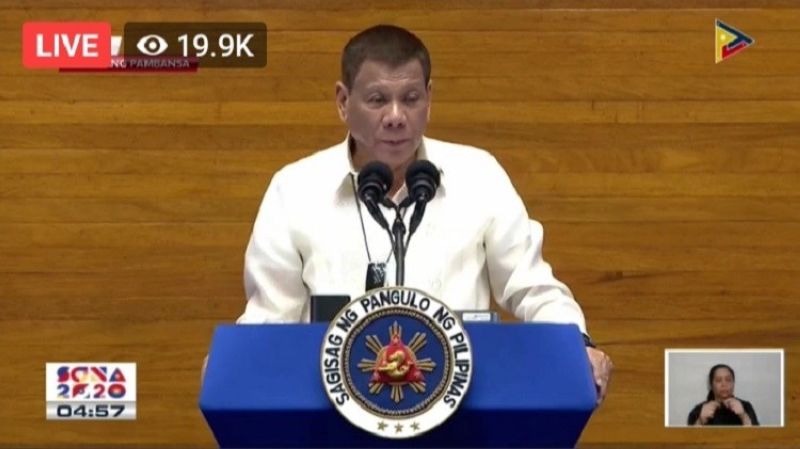 SONA. Screengrab of the fifth State of the Nation Address of President Rodirgo Duterte Monday, June 27, 2020. (Courtesy of PTV)

This was how the labor group General Alliance of Workers Associations (Gawa) considered the fifth State of the Nation Address (Sona) of President Rodrigo Duterte Monday, July 27, 2020.

Wennie Sancho, secretary-general of Gawa, noted that the Sona started with an offensive opening salvo against ABS-CBN and Senator Franklin Drilon and it ended with a clincher calling the latter a hypocrite.

The president hit the senator for allegedly defending the Lopezes.

He even blasted the Senate minority leader for “arrogantly” making a remark on oligarchs.

For Sancho, this is unethical.

“Nothing much was said about the massive unemployment although he said that reconstruction would come sooner than later. As to when we do not know,” he said.

The labor leader added, “like most government economists he believes that our fundamentals are strong despite the fact that the majority of our people are suffering from hunger and poverty due to the pandemic.”

In his address, the president said he would "close" all telecommunication providers and "expropriate" if services won't improve by December this year.

For Sancho, the Sona should not be used as a venue to make threats because it is a report for the people.

He said the president, again, made promises forgetting that he failed in his promise to stop "endo" or end of contract scheme.

He did not mention our huge local and foreign debts. The option of the government is to have more loans to pay the previous loans, Sancho said.

“We were dismayed over his statement that China is in position of the territory that belongs to us and that he is inutile to do something about it,” he said, adding that “with the President expressing the restoration of the death penalty, the Sona was indeed a threatening rhetoric.”