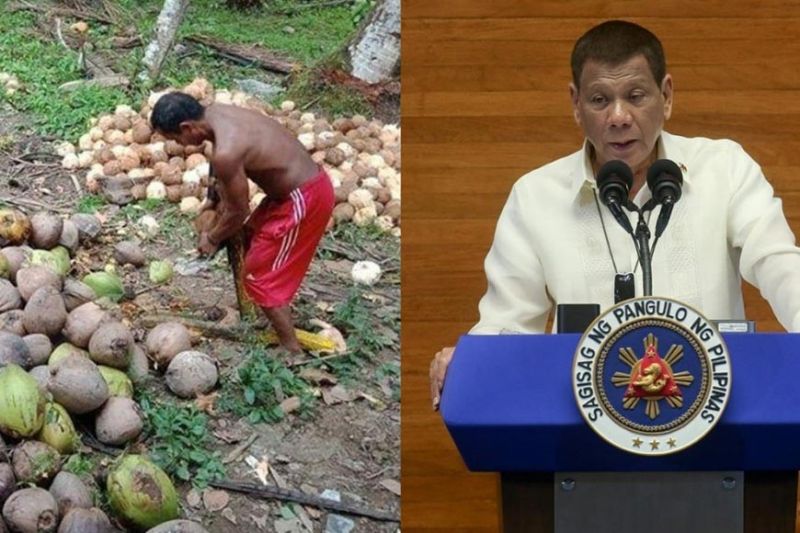 COCONUT farmers in Davao Region lauded President Rodrigo Duterte for bringing up the long-shelved issue on coco levy and for pushing for the establishment of the coconut farmers' trust fund in his fifth State of the Nation Address (Sona) on Monday, July 27, hoping the government to maximize its use.

In his speech, Duterte urged Congress to review how the coco levy funds will be utilized for the welfare of the country's coconut farmers and the development of the coconut industry.

The coco levy is the taxes imposed by former President Ferdinand Marcos on coconut farmers from 1971 to 1983.

He also wanted them to pass a version of the bill that establishes the Coconut Farmer's Trust Fund.

However, Clamor hoped that this time, the legislative will consider the proposals of the coconut farmers for the trust fund to really serve its purpose.

He said the discussions for the bill that was supposed to use the roughly P75 billion to P100 billion of coco levy into a trust fund were stalled due to differing provisions of the Congress and the proposal of the coconut farmers.

He said the bill provides that funds, which is technically the money of the farmers, must be utilized for only 25 years.

He said the coconut farmers also suggested reconstituting the committee in the Philippine Coconut Authority that will manage the funds to include more farmer-representatives.

"They want to put one representative from each region and one from the industry. There are only three farmers and one on the business side. The rest are cabinet people. Put more farmers if possible so that there will be voices that will represent the interest of the farmers," he said.

Duterte, however, said he will not meddle with the bill in the Congress.

"I will not make any suggestion but I leave it to Congress to decide what to do with it," he said in his speech.

Clamor said among the challenges of the coconut industry that they expect the dole out will address are the gaps in the research and development (R&D), mechanization and productivity woes, exploring new markets for coconut.

He said the coconut production rate in the Philippines is far from other countries due to insufficient fertilization and R&D.

"This is because of tremendous research and hopefully, the government will look into hybridization or coming up with a superior variety of coconut because we do not have that," he said.

He said the appropriate nutrient-rich fertilizers must also be provided through the coco levy fund to increase yield.

Clamor also cited the need for mechanization to support the declining population of coconut farmers due to old age and to help farmers' add value to their produce.

"Marami nang bagong products ng coconut pero mostly, hindi si farmers yung nakakabenefit kasi people get it very cheap from the farmers and kakaunti lang ang farmers that really succeeded into becoming an entrepreneur or a businessman (There have been new coconut-based products but it did not benefit the farmers. People source raw materials from them at a cheap price and only a few coconut farmers who became entrepreneurs)," he said.

"We are happy na minention nya ito sa kanyang Sona. Ang sa amin lang sana, utilize it in a way that will benefit the farmers (We hope it will be utilized for the benefit of the farmers)," he said.

It can be recalled that Duterte vetoed the coco levy fund bill in around the middle of February 2019 because it "may be violative of the Constitution and is lacking in vital safeguards to avoid the repetition of painful mistakes committed in the past."

He opposed the broad powers of the Philippine Coconut Authority especially on the sale, disposition, and dissolution of the coco levy assets that it might be prone to corruption.