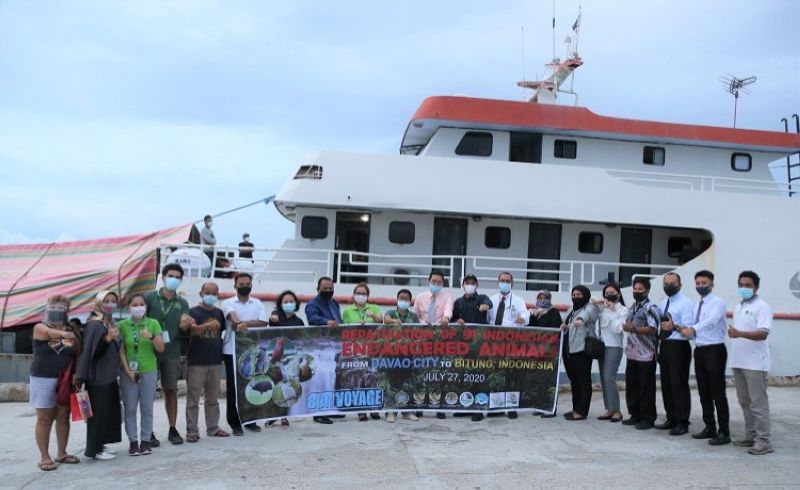 Photo from the Indonesian Consulate in Davao City

NINETY-ONE endangered animals endemic to Indonesia have finally been sent home after being revived in Davao Crocodile Park for more than a year.

In a press statement from the Consulate General of the Republic of Indonesia in Davao City (KJRI), among those that were repatriated on Monday, July 27, were Palm cockatoo (Probosciger aterrimus), sulphur-crested cockatoo (Cacatua galerita), lory, northern cassowary (Casuarius unappendiculatus), wallaby, Papuan hornbill (Rhyticeros plicatus), skink, and eclectus parrot (Eclectus roratus).

These animals are said to be just a few of the survivors of the more than 300 trafficked wildlife species rescued by the Department of Environment and Natural Resources (DENR)-Davao in Sitio Manggihay, Barangay Dahican, Mati City, Davao Oriental in April 2019 through their Task Force Pogi (Philippine Operations Group on Ivory and Illegal Wildlife Trade).

The species, which were said to included 18 mammals and 63 reptiles, have an estimated international value of P50 million and local value of P8 million.

The animals were then brought to the Davao Crocodile Park (DCP), which is the main partner of DENR-Davao in conservation and perpetuation of wildlife animals being rescued in the region.

But DENR-Davao information officer Jayvee Jude Agas said only a few of them survived.

"Some were already weak and stressed nung na apprehend as these animals came from Indonesia. Na stress sila when they were transported here," she said.

DENR-Davao earlier noted that the animals were considered endangered based on the Convention on International Trade in Endangered Species of Wild Fauna and Flora (Cites) in which the Philippines and Indonesia are member countries.

Other animals were considered as Less Concern in the International Union for Conservation of Nature Red List of Threatened Species (IUCN Red List).

KJRI said the animals will be traveling for an estimated 30 hours from Davao City to Bitung City, Indonesia aboard sea vessel Gloria 28 and will be escorted by a team from the Ministry of Environment and Forestry-Indonesia that consists of animal keepers, forest ranger and a senior officer with expertise in the field of birds and mammals.

Consul General Dicky Fabrian expressed his gratitude to the Philippine government, especially to DENR-Davao, in ensuring that these wildlife animals will be returned to their habitat in Indonesia.

"One of the strategic routes that is often used to smuggle illegal wildlife from Indonesia, especially from the eastern region; for that we continue to establish good relations and increase support from the Philippine government to be able to disclose illegal circulation activities of Indonesian animals as an effort to protect Indonesia's biological wealth, of course we all hope and continue to strive to eradicate illegal wildlife trade and increase public awareness," he said in a statement.

He also lauded the efforts of the Davao Crocodile Park that took care of the animals to regain their health.

The sendoff ceremony was conducted at the Sta. Ana Port-Davao attended by officials from the KJRI, DENR-Davao, Department of Agriculture-Bureau of Animal Industry and DCP.

The Indonesian Government committed to shoulder all the expenses for the repatriation of the animals.