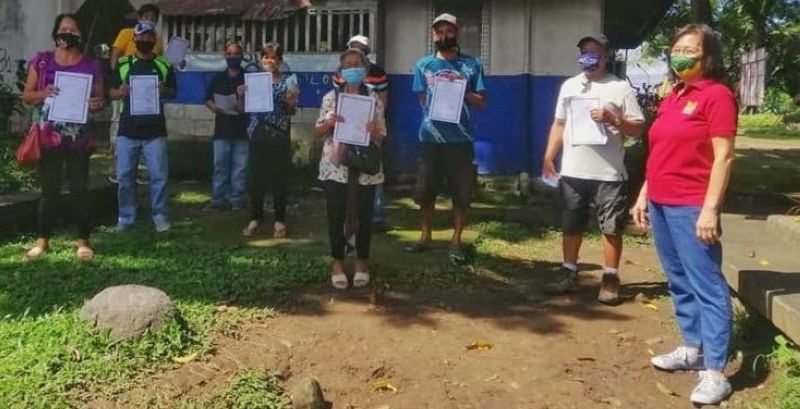 BACOLOD. Farmer-beneficiaries in Murcia town receive their certificate of land ownership award from the Department of Agrarian Reform-Negros Occidental I recently. (Contributed photo)

THE Department of Agrarian Reform (DAR) in Negros Occidental-North has awarded a total of 30 hectares of land to agrarian reform beneficiaries (ARBs) in towns of Murcia and Toboso recently.

In Murcia, 12 hectares were awarded to 11 ARBs in a certificate of land ownership award (Cloa) distribution and installation rites.

Municipal Agrarian Reform Program Officer Antonia Figueroa, who spoke at the activity, congratulated and reminded the farmer-beneficiaries of their tax responsibilities and obligations as new landowners.

In Toboso, at least 18 hectares were distributed to 27 ARBs also in a Cloa distribution and installation rites recently.

Municipal Agrarian Reform Program Jasmin Castillo also urged farmers to make the land productive “in a way that can uplift your lives and reach economic stability.”

“Always keep in mind your obligations as new landowners of the land, pay the annual amortization and land tax,” she added.

The land distribution and ARBs installation in both towns were conducted through Land Acquisition and Distribution (LAD) process under the Comprehensive Agrarian Reform Program Extension with Reforms (Carper).

The DAR is mandated to acquire and distribute public and private agricultural landholdings to tenants, farmers, farmworkers and other tillers who are qualified to become ARBs.

The agency, through the program, aims to provide lands to landless farmers and farmworkers, guarantee the farmers' land security, deliver social equity, and provide them with the necessary productive resources needed to ensure their economic viability and productivity.

With Negros Occidental still under the Modified General Community Quarantine, the activities have complied with minimum health protocols set by the Inter-Agency Task Force on Emerging Infectious Diseases and the Department of Health.