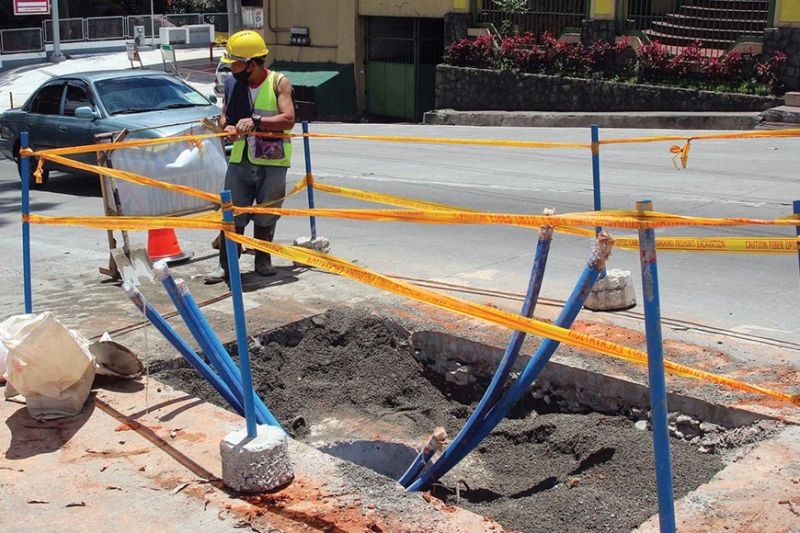 BAGUIO. A worker puts up caution signs for the fiber optic lines along Buhagan Road in Baguio City. Representative Marquez Go confirmed in a radio interview the fiber optic cables were laid out by Dito Telecomunity Corp. (Jean Nicole Cortes)

Representative Marquez Go, in his weekly radio program over dzEQ Radyo Pilipinas Baguio, confirmed that Dito Telecomunity Corp. (Dito) started digging in some of the city's road for their fiber optic cables to give consumers another option for internet connectivity.

"Dito assured they are in compliance with our existing regulations. When after all this things are done, we should have good results in terms of the capacity it will provide or deliver to our city which is expected to be finished and operate this year," Go said.

"The advantage of this is for existing service providers to improve their services," the lawmaker said.

The company will offer only 4G technology in line with its commitment to increase internet speed in the country to 55 Mbps.

Dito committed to achieve 37.03 percent national coverage with an average speed of 27 Mbps on its first year of operations.

By its fifth year of operations, it is expected to cover 84.01 percent of the population with an average speed of 55 Mbps.

"I think we are one of the pilot areas because we are one of the urbanized city in the country and we need to have this kind of capacity since Baguio is the entry point of all other municipalities and provinces of the north. Most of the economic activities are centered in the City of Baguio and I understand that they will have to operate within this year for us to try this third telco," Go added.