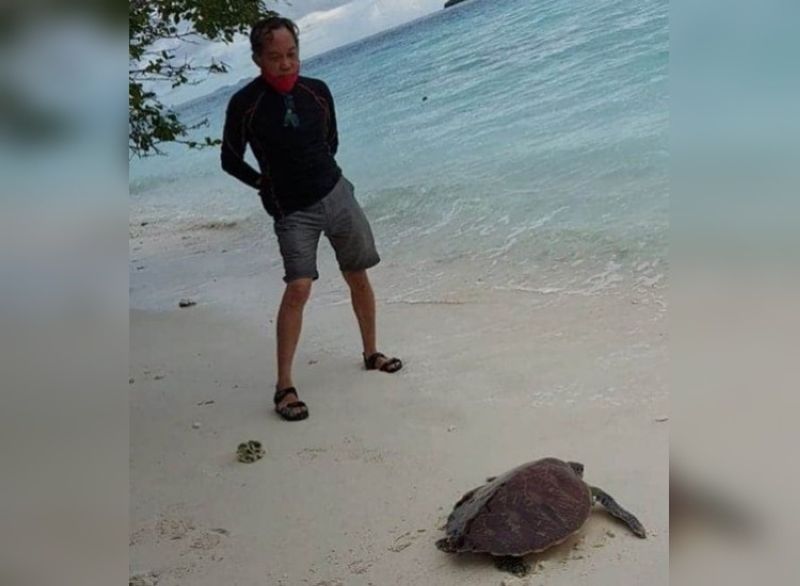 ZAMBOANGA. A resident of a coastal village in this city recently rescued a female green sea turtle, which faces a very high risk of extinction. A photo handout shows an environment official leads the release of the turtle back to its natural habitat. (SunStar Zamboanga)

The release of the turtle back to its natural habitat by the personnel of the Biodiversity Conservation Unit was led by Cenro Chief Ariel Barrientos.

Barrientos said the juvenile green sea turtle, which weighs 9.11 kilograms with a curved carapace length of 45 centimeters and width of 43 centimeters, was rescued by Melvin Pusta, a resident of the coastal sitio of Mulu-Muluan in the village of Mercedes.

Barrientos said that Pusta immediately brought the marine turtle to local Cenro for their appropriate action.

Upon thorough examination, it was determined that the turtle had no external injuries and was very active.

Thus, Barrientos immediately released it at the Santa Cruz Islands, which is a declared protected area under the Expanded National Integrated Protected Areas System in this city.

Green sea turtles are listed as endangered by the International Union for Conservation of Nature (IUCN) as it faces a very high risk of extinction in the wild in the near future.

Barrientos said that most threats faced by green sea turtles include over harvesting of their eggs, hunting of adults, being caught in fishing gears and loss of nesting beach sites. (SunStar Zamboanga)