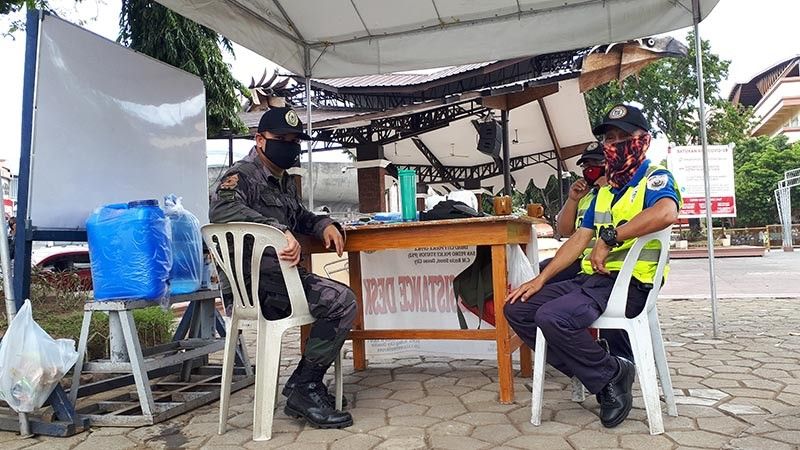 Photo from the Philippine Information Agency

He said they have not yet received the complete results of the second batch or 240 security personnel who underwent swab tests last July 22.

"We are still waiting for the final result. Yung others, I cannot give details because of privacy and confidentiality," he said.

But he said all other personnel who were swab tested include those under several government agencies in the Camp Domingo E. Leonor such as the Philippine Drug Enforcement Agency (PDEA), National Intelligence Coordinating Agency (Nica), Police Security and Protection Group (PSPG), PNP Anti-Cybercrime Group (PNP-ACG) and PNP Anti-Kidnapping Group (PNP-AKG).

The first Covid-19 case of the Davao City Police was a member of the Special Weapons and Tactics (Swat) Motorcycle Quick Response Team who was assigned in Barangay 23-C when it was put under lockdown.

The other law enforcement officers who later tested positive for the Sars-CoV-2 are four policemen, one police auxiliary, one intelligence agent.

It forced DCPO to temporarily close its compound on July 15 and subjected its personnel to swab tests.

Releasing of police clearance and travel authority was temporarily suspended at DCPO.

Earlier, Kraft said he has authorized the San Pedro Police Station to issue travel authority and other documents for those going out of the city starting July 15.

Kraft said they have advised their security forces assigned in very high risk and high risk areas to continue to observe the minimum health standards.

"They have to wear a face mask and face shield, to observe physical distancing, and to always carry alcohol for disinfection," he said.