After 99 days of success, virus returns to haunt Vietnam 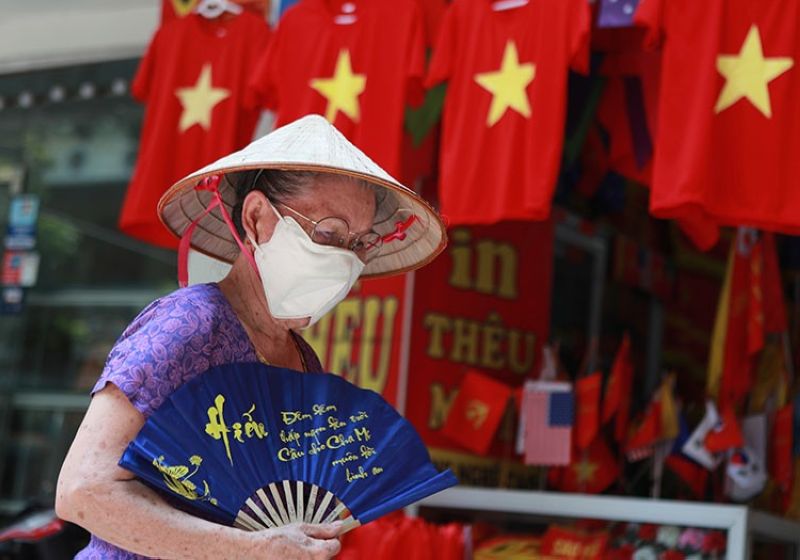 VIETNAM. A woman walks past a row of T-shirts printed with Vietnamese flags in Hanoi, Vietnam on Thursday, July 30, 2020. (AP)

HANOI, Vietnam -- For 99 days, Vietnam seemed to have defeated the coronavirus. There wasn’t a single reported case of community transmission. Not a single death. A handful of cases were caught and isolated at the border, but otherwise people were returning to their normal lives. The country of 96 million people was hailed globally as a standout success.

But then a week ago, an outbreak began that has now grown to 43 cases in six parts of the country, including three of the largest cities, and forced authorities to reimpose restrictions many thought they had put behind them. And experts worry the outbreak could be much larger than currently known.

The outbreak began last Thursday in the picturesque coastal city of Da Nang, where thousands of tourists were taking their summer vacations on golden beaches. A 57-year-old man was hospitalized with a fever and tested positive. His condition soon worsened and he was put on a ventilator.

Health authorities swung into action. But the man’s case was puzzling. He hadn’t left his hometown for over a month and tests on his family and 100 other possible contacts all came back negative.

Then health workers found three other infections in Da Nang over the weekend. And then on Monday, another 11. All of those were other patients or health workers at the Da Nang Hospital, where the man remains in critical condition.

On Monday, authorities encouraged 80,000 tourists to leave the city by providing extra flights. Hotels emptied out and thousands canceled their plans to visit.

Then on Tuesday, the city was put into lockdown. The packed beaches were closed, roamed only by patrolling security guards. But the order of events left some scratching their heads. Surely the fleeing tourists had the potential to spread the virus further?

Indeed by Thursday, authorities had found 43 cases, including two people in the capital, Hanoi. All of the cases seemed to link back to Da Nang and returning travelers.

The cases included an American who had been a patient last week at Da Nang Hospital before moving to another hospital in Ho Chi Minh City in the south. His companion also tested positive.

Authorities are now reimposing broader restrictions. They’re closing nonessential services and banning large public gatherings in Da Nang and other nearby cities, and closing bars and clubs in Hanoi. They're also planning to test 21,000 people in the capital who recently returned from Da Nang.

Pham Hien, owner of a noodle restaurant in Hanoi, said she will no longer have seated guests and instead will offer only takeout service or deliveries. She said her business is hurting but she will abide by government recommendations.

“What is important now is that all citizens join hands together with the government in this fight,” she said.

Just how the virus crept back remains a mystery. Authorities say they think the source was from outside Vietnam because this time the virus is a different strain.

“One big difference I’ve noticed between this wave and the previous one is that the cases we have right now, a lot of them are severe,” said Marc Choisy, a Hanoi-based bio-mathematician with the Oxford University Clinical Research Unit.

He said such a high proportion of severe cases could indicate that hundreds more asymptomatic cases remain undetected in the community.

“It’s very likely the disease is transmitting silently at the moment,” he said.

The government, meanwhile, has been cracking down on people being smuggled into the country to avoid quarantine, making a string of arrests in cases of smuggled Chinese nationals. But authorities have yet to make any direct links between the people smuggling and the new outbreak.

Vietnam’s struggle to contain the virus even after its initial success has been reflected in other places around the world. Australia was down to single-digit daily increases when an outbreak exploded in the city of Melbourne this month. On Thursday, authorities reported more than 700 new cases in and around Melbourne, a record. Other places from Hong Kong to Spain are battling new outbreaks after seemingly having the virus under control.

Vietnam’s quick actions in the face of its latest outbreak reflect the speed with which the government reacted to the initial virus threat, which experts say helped halt its spread.

In mid-February, for example, Vietnam put all 10,000 residents of the town of Son Loi, near Hanoi, under a three-week lockdown, even though there were only 16 confirmed cases in the entire country at that time.

The Communist government also used texts and social media to deliver concise instructions to its citizens. It even added short messages to every phone call.

By March 22, Vietnam had essentially closed itself off to the outside world, stopping most international flights and shutting down the 900-mile (1,440-kilometer) land border it shares with China.

Whenever authorities saw even a single case of community transmission, they jumped on it with contact tracing, lockdowns and widespread testing. The country also drew on its past experience defeating the SARS outbreak in 2003.

But Choisy, the bio-mathematician, worries authorities have caught this coronavirus wave much later in its cycle than the first wave.

“When you haven’t heard about new virus cases for a while, you begin to forget very quickly and you return to normal life,” Choisy said. "You get used to it.” (AP)