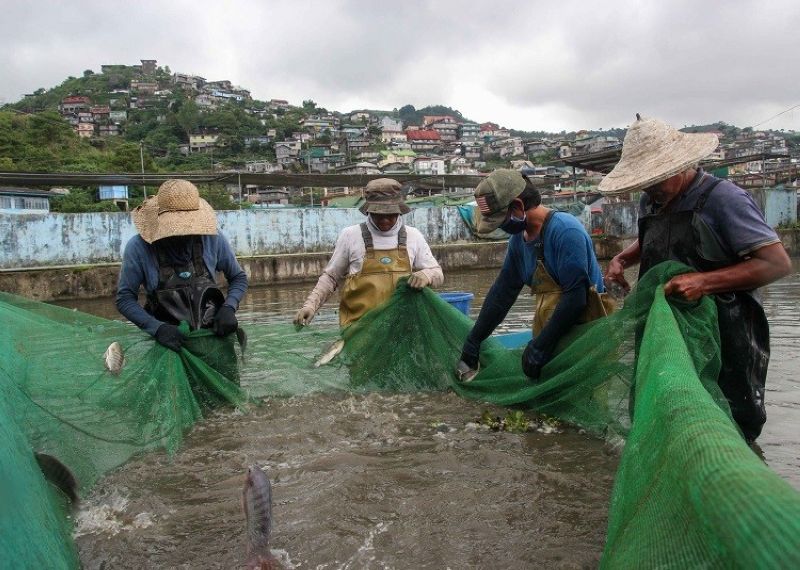 FISHING IN THE HIGHLANDS. Workers from the Department of Agriculture (DA) and Bureau of Fisheries and Aquatic Resources (BFAR) in La Trinidad harvest tilapia eggs at their fish farm inside the Benguet State University. The fingerlings will be donated to beneficiaries of DA. (Photo by Jean Nicole Cortes)

WITH the success of survival gardening in Baguio City, aquaponics is now being pushed to survive the ongoing global pandemic.

The City Veterinarian and Agriculture Office (CVAO), together with the Bureau of Fisheries and Aquatic Resources (BFAR) under the Department of Agriculture – Cordillera Administrative Region (DA–CAR), is set to implement P2.1 million Urban Aquaculture (Aquaponics) project.

The project is funded by BFAR-CAR after the request of Mayor Benjamin Magalong from the agriculture department.

Aquaponics is suitable for urban areas that have lesser spaces for production as provinces have areas for fish production, fish ponds.

Arnulfo Taberna Jr., provincial field officer of BFAR-CAR, and his team are leading the fabrication of solar-powered aquaponics to help in the food production program.

One unit costs about P40,000, which the group targets to deliver to beneficiaries of Baguio and Benguet in August this year.

Taberna said the technology entails the need for electricity and a few amounts of water circulating in the system. It is intended to work 24 hours as the design includes solar power, which is more economical and can even be utilized during night time.

Production of the locally manufactured design entails less than a week, incorporating fiberglass to the fish tank of the aquaponics that could last up to 30 to 40 years.

Taberna said there is more demand for the technology in Baguio considering it does not have many spaces for fish ponds.

Fish production in the mountains

Marx Perfecto Garcia, BFAR-CAR Aquaculturist said the production of fish in the Cordillera has been challenging as data shows the region is only 13.4 percent sufficient.

“Making fish available, affordable and sustainable in the region is a really big challenge for us,” said Garcia.

He added that with the 86.4 percent shortage in fish, there are traditional interventions such as the establishment of fish ponds, fish cages and integrated systems and promotion of aquaponics.

Lilybeth Signey, BFAR-CAR regional director, said the projects aim to yield a high production of food for the region, which include aquaponics and enhancement of food production.

Signey said out of the P32 billion budget, P1 billion is intended for fisheries.

“Out of the P1 billion, Cordillera has P37.2 million for 2021 in addition to the regular budget and hopefully it will materialize,” added Signey.

The BFAR-CAR regional director said projects like aquaponics will be an addition to the production of the region to the existing production of food readily available in one’s backyard in the midst of the pandemic.

CVAO Chief Dr. Brigit Piok said they are lucky that their project proposal to the agriculture department was approved and added the aquaponics project includes providing inputs and training for the program.

This year, the city will start with 10 units to be turned over for identified beneficiaries.

Piok explained the first 10 units to be given to beneficiaries mostly schools and offices will be used as a starter kit for the technology.

Additional beneficiaries will be identified in 2021.

Before the city embarked on the aquaponics project, Piok said farmers from Barangay Lucnab in the city started their on their own and tided theirs over the early months of the quarantine.

“One of the farmers harvested 15 kilograms of Tilapia so the farmer said during the pandemic, he did not sell this and did not have a problem going to the market during the lockdown. Fish and vegetables harvested in that area provided food for their home,” Piok said.

Piok added survival gardens in the city continue to thrive and are considered as the best practice of the City Government.

Since its implementation in March to July 29, 2020, CVAO data showed there were 191 kilograms of various vegetable seedlings distributed to 3,821 individuals who availed of the seedlings.