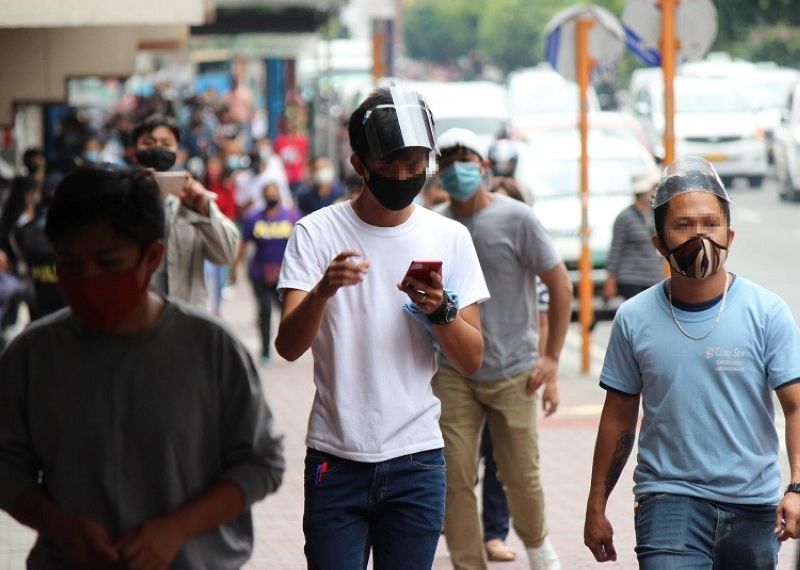 DON’T LET YOUR GUARD DOWN. Health officials remind the public to wear face masks and personal protective equipment properly, reiterating that each is accountable for their actions. (Photo by Jean Nicole Cortes)

CORDILLERA’S Covid-19 cases have surged to 73.94 percent, the Department of Health (DOH) in the region confirmed.

Doctor Amelita Pangilinan, DOH-Cordillera Regional Director said as of July 29, the region has 247 confirmed cases from the 142 cases reported on July 16.

Pangilinan said the increase is due to the intensified contact tracing of close contacts of its laboratory-confirmed Covid-19 cases and the implementation of the expanded Covid-19 testing capacity in the region.

The DOH official added the increase in number was also due to the lifting of travel restrictions, allowing locally stranded individuals (LSIs) and returning overseas Filipino workers (rOFWs) to their hometowns.

To date, 12 or 5 percent of OFWs and 31 or 12 percent of locally stranded individuals tested positive for Covid-19.

DOH also reported that Covid-19 incidence rate was recorded at 13.5 percent per 100,000 population with case doubling time at 16.43 days

Cordillera’s critical care utilization rate was at 28 percent, 142 males or 57.5 percent were affected compared to females. Most affected age groups were listed at 20 to 39 years old.

“Out of the 247 cases, 113 are still admitted but in stable condition, while we have two cases under verification. The 105 new cases are from Abra with nine, Apayao with four, Kalinga with 15, Ifugao with 10, Mountain Province with three, Benguet with 17 and Baguio City with 47,” added Pangilinan.

As of Thursday, July 30, 35 municipalities in the region recorded Covid-19 cases while 41 barangays in Baguio City were affected by the virus.

“Despite this increasing numbers, everyone should not panic because our health care system has adapted to the new norm with the aid of our partner agencies, our local government units, our local chief executives and the community, Pangilinan said.

"One major plus factor is the setting up of community isolation units and temporary treatment and monitoring facilities in our region to cater to confirmed cases that present mild symptoms and or are asymptotic at the time of detection, which has eased up the load at referral hospitals allowing them to cater only to severe or critical cases,” Pangilinan added.

DOH-Cordillera reiterated to the public to be proactive and diligently follow guidelines, particularly the minimum health standards.