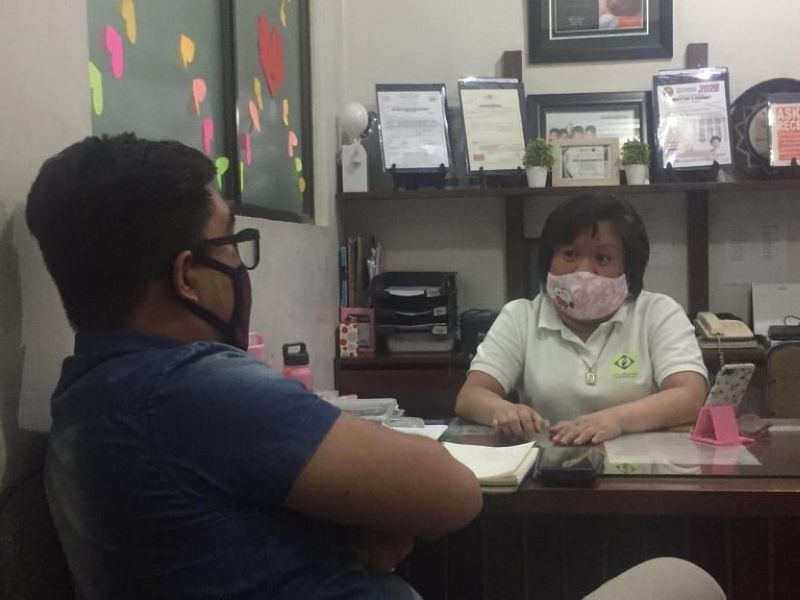 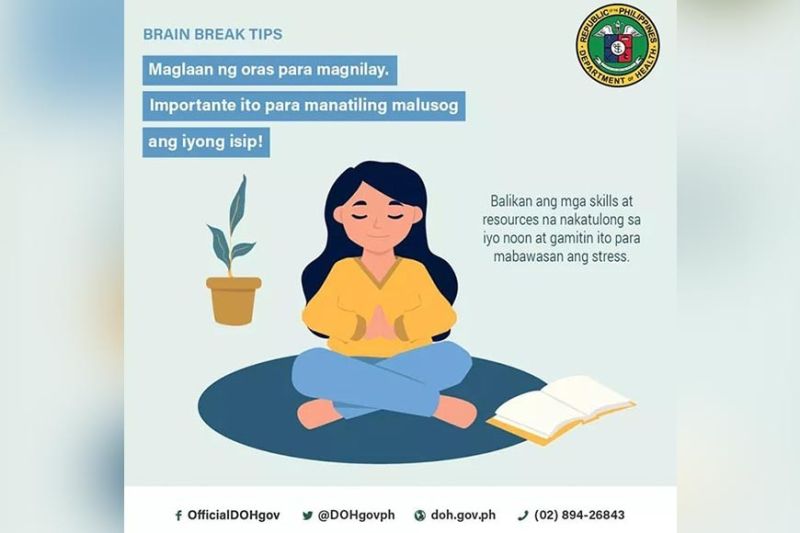 BACOLOD. A poster by the DOH giving tips on how to maintain good mental health this pandemic. 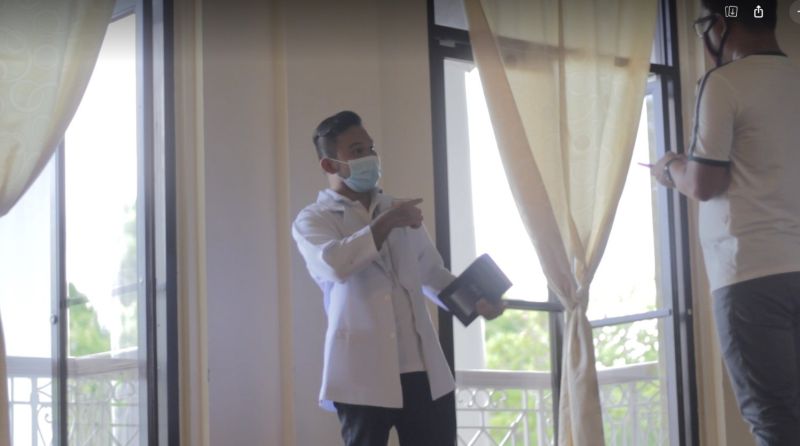 BACOLOD. For Negrense psychologist Mark Ortibano, seeking help from mental health professional should not be ashamed of. 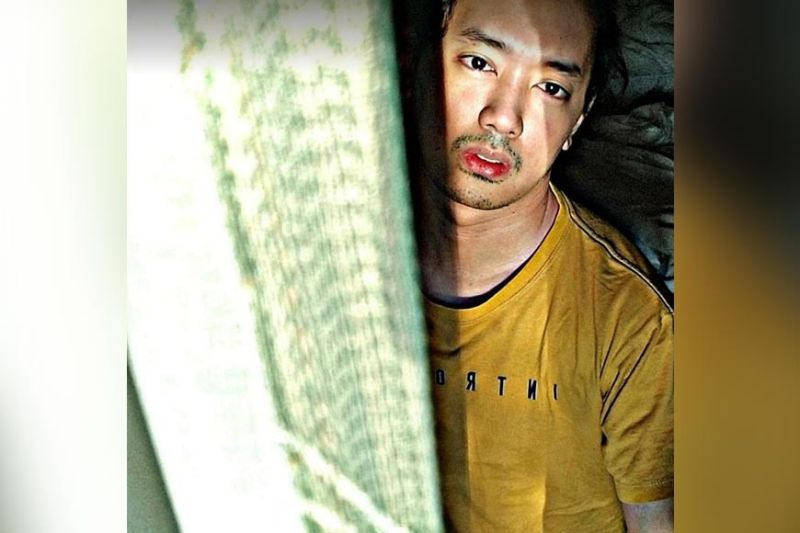 AS TO when the Covid-19 pandemic will end, it remains uncertain. But, what is sure for now is the growing number of Filipinos facing mental health issues while the crisis continues to bring onslaught to the country.

The National Center for Mental Health, in a media briefing last month, noted a spike in the figure as shown in the surge of calls it received through its hotline during the lockdown period.

The center, in a report, said from an average of 13 to 15 calls daily a few months prior to the lockdown, it climbed up to 35 calls per day during the implementation of strict quarantine measures.

The World Health Organization (WHO) said that added to the fear of contracting the virus in a pandemic such as Covid-19 are the significant changes to the people's daily lives as their movements are restricted.

Faced with new realities of working from home, temporary unemployment, home-schooling of children, and lack of physical contact with other family members, friends and colleagues, it is important that people look after their mental, as well as our physical health, it said.

The City Government of Bacolod has already recognized the importance of giving attention to the issue of mental health amid the Covid-19 pandemic that struck and caught the world unprepared.

The group, during these meetings, discussed the steps on how to integrate psychosocial measures and approaches in the community as part of the local responses against the dreaded virus.

As of July 29, the Department of Health (DOH) in Western Visayas reported that the number of confirmed Covid-19 cases in Bacolod City surged to 176. Over 50 cases are local transmissions.

The agency noted 59 recoveries, while the active cases are 113. The death toll remains at four, it added.

Familiaran said depression and other disorders including anxiety are really prevalent among Covid-19 patients and their families, as well as frontliners.

"The quarantine has been extended and the positive cases continue to rise. News and social media posts are all about the virus," he said, adding that "depression is really there, it's going to the ground."

The task force chair is upbeat that the volunteer group will help in the bid to address the mental health issue in the locality.

Among the initial strategies they have identified included provision of different online interventions like psychological first aid, debriefing, counselling and other psychological support to those in need.

Once finalized, Familiaran will then discuss the measure to Mayor Evelio Leonardia including the creation of a Mental Health Psychosocial Committee as part of the city's task force against Covid-19.

"This is really aimed at helping our constituents who suffered from stress, traumatic experience and depression," the task force chair said.

Rose Jessica Octaviano, who has been advocating for mental health since 2009, is one of those who responded to the call of the local government to face this "emotional monster" that threatens the mental health of the city residents.

Octaviano was a member of the defunct Philippine Mental Health Association that spearheaded activities like mental health awareness and mental disorder prevention.

In the province, she is part of the Psychological Association of the Philippines - Mental Health Psychosocial Support Bacolod-Negros Hub that is providing trainings on Psychological First Aid to barangays and various groups.

Presently, Octaviano is an active member of the Western Visayas Psychosocial Support for Covid-19, a social media group that provides online therapy to those needing interventions.

"We hope that even after this Covid-19, the partnership with the government sector will continue," she said, lamenting that "before, only private individuals and non-government organizations are working hand-in-hand."

"The government assists in terms of funding, but it was seemingly not its priority," the mental health advocate, also a depression survivor, said.

One of the significant volunteer works of Octaviano was the creation of a directory containing information on where to get mental health services in Negros Occidental.

This directory had linked patients of various mental disorders with mental health professionals thereby enabling the former to seek proper interventions and eventually recover from these abnormalities.

"There are private individuals and groups who are really willing to help. Personally, my line of communications remains open, whether through email and Facebook, that's an assurance," she said, adding that "if the case is serious, since I am not a registered psychologist, I can refer them to appropriate mental health professionals."

The DOH, for its part, has recognized the real threats brought by the pandemic to the mental health of the Filipinos. In fact, it has issued some tips in order to maintain a good mental health amid this global crisis.

These include staying positive and maintaining a healthy lifestyle.

People are also advised to give time for themselves to reflect, meditate and go back to the skills and resources which had previously helped them lessen their stress.

The health agency said if there's a need to talk to mental health professionals, the National Center for Mental Health and Mind Matters Hotlines can be reached through their hotlines 09178998727 and 09189424864, respectively.

For Ortibano, seeking help from a mental health professional should not be ashamed of. Aside from the medicines and psychotherapy provided by psychiatrists and psychologists, the emotional and social support from the family are essential to help people suffering from depression.

"Connect, those people you haven't checked for a while, checked them. Talk to your trusted friends. Your family, your mother. If they are not around, those that you can trust," the psychologist said.

In Kenneth's case, for instance, his family and friends have helped a lot in overcoming this "emotional monster" that had almost swallowed his mental health.

He was able to meet some friends online, who are also active in church activities like him.

They have served as Kenneth's support group to divert his attention and lessen the boredom and sadness he felt while on quarantine.

"If you keep it to yourself, you will never know in what way you will explode. You should keep your faith whatever happens," he shared.

The issue on mental health is not new to the Philippines. Before the Covid-19 has shocked the nation, many Filipinos have already been suffering from various mental disorders.

As the country continues to be confronted by tragedies, calamities and many other events that have caused turmoil in the society, the people also need to be mentally prepared.

Depression is no joke, it is an "emotional monster" that may frighten anyone. Thus, this matter should continue to be an agenda for public discussion.

That, whether there is a pandemic, or none, it should be given due importance. Like how the entire nation fights Covid-19, Filipinos must also be one in breaking the scare of depression.