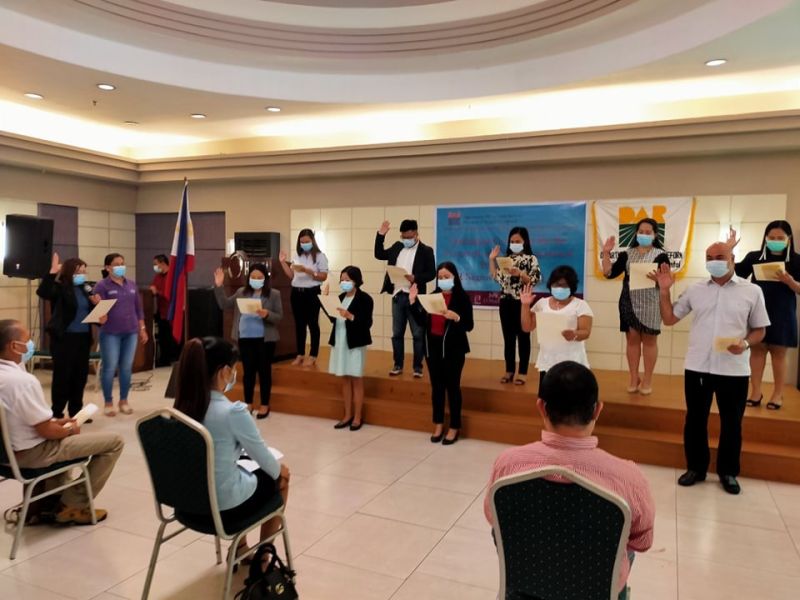 THE Department of Agrarian Reform (DAR) in Western Visayas has urged its newly-promoted and appointed personnel in Negros Occidental to create impact to the lives of agrarian reform beneficiaries (ARBs) in the province by breaking the cycle of poverty through agrarian reform.

On Thursday, July 30, 48 newly-promoted and appointed personnel of the agency took their oath in rites held in Bacolod City.

Of the number, 16 were newly-promoted personnel of DAR-Negros Occidental II.

DAR-Western Visayas Director Sheila Enciso, who administered the oath-taking, urged the personnel to be humble by sharing their learnings and expertise to various stakeholders of the agency particularly to the farmers.

"Being humble does not mean to be obedient at all times, but rather by sharing our God-given assets to our clients that would help them uplift the quality of their lives," Enciso said, as she told personnel to avoid transactional business to maintain their names clean.

Assistant Regional Director Lucrecia Taberna, who was also present at the activity said, the personnel are considered as the fortunate ones for they are chosen to be part of the DAR after passing the qualifications set by the governing law.

"You are lucky because you are chosen through the wisdom of our regional director after the thorough screening and deliberations," she said, stressing that the promotion is coupled with responsibility which the personnel must perform to achieve the social justice agenda of the government.

"You must work in the DAR not for comfort but for greatness especially now that we are expecting much from you to help us accomplish the three major final outputs," Taberna added.

The official further emphasized the importance of the attitude that an employee should have in the agency like giving respect and treating the co-employees as family and not as competitors.

For his part, Assistant Regional Director Gideon Umadhay Jr. appealed to the newly-promoted and appointed personnel to maintain integrity, dedication and honesty in the public service.

"After taking your oaths, you are now considered as civil servants who are considered as partners of this agency to achieve economic prosperity and rural development," Umadhay said.

Also present during the oath-taking were Provincial Agrarian Reform Program Officers of DAR-Negros Occidental and their respective division heads along with other personnel and staff.