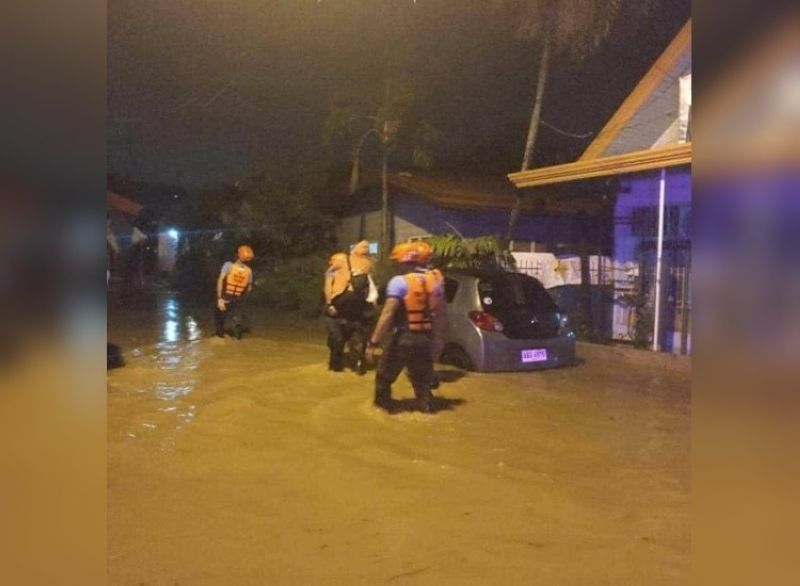 San Vicente in Buhangin is currently flooded due to heavy downpour on Wednesday evening. Not passable to light vehicles. (Photo courtesy of CIO)

HIGHLY flood-prone residential areas in Davao City, such as the Jade Valley Homes, are being recommended to be converted into parks and open space zones based on the draft Comprehensive Land Use Plan (CLUP) 2020-2028.

City Planning and Development Office (CPDO) head Ivan Cortez said among the proposed updates of the city’s current CLUP is the consideration of the disaster risk assessment in classifying zones.

He said the CLUP 2020-2028 will add a fourth book for this purpose on top of the existing three-volume land-use plan.

Among these changes, he said, was to convert flood-prone residential zones into either park and open space zone or commercial zone depending on how high the level of water can rise during heavy rains.

Cortez cited the Jade Valley Homes in Barangay Tigatto where residents usually suffer ceiling-high floods during rainy seasons since it is originally a part of a river.

“Sa sinugdanan pa lang dapat wala gyud na sya na-approve as residential. Pero kay nabuhat na man siya, na-approve na man siya as residential dati, ang atong buhaton karon is atong ibalik ang iyang pagka part sa tubig. (No residential projects should have been approved there. What we will do is we will try to slowly revert it to what it is supposed to be) We will recommend it as parks and open space zone,” he said.

“If the risk of flooding is very high, it should not stay as a residential area,” he added.

On Wednesday evening, July 29, San Vicente, Buhangin was flooded due to heavy downpour and was not passable to vehicles. There were no casualties reported.

In previous interviews, Davao City Disaster Risk Reduction and Management Council (DCDRRMC) administration and training chief Lyndon Ancajas said he estimated around 157 barangays that are near the city’s rivers.

He said almost 90 barangays are situated near Davao River, almost 20 barangays are near Lipadas River, Paquibato and Lasang area in Lasang River, seven barangays in Matina Biao and about 40 barangays near Talomo River.

Cortez said the proposal to convert flood-prone residential zones into parks and open spaces is intended to reduce the impact of disasters on Davao City residents.

He also clarified existing residents will not be pushed out of subdivision once the draft of the updated CLUP is approved.

He said they will still be allowed to stay in the area as existing non-conforming use except that they will no longer be able to secure permits for house construction or renovation of more than 50 percent of their houses.

Meanwhile, areas with a lower risk of flooding may still be kept as residential zones but might require residents or developers to build two-story houses.

“Para kung sakali man nga adunay abnormal level of waters nga musaka gyud, at least makasaka man lang sya sa second floor nga dili madelikado ang ilahang kinabuhi (This is to enable people to save themselves in the second floor of their houses in case there is an abnormal rise of water),” he said.

He added other low flood risk areas are recommended as commercial zones.

Cortez said they have already furnished the draft to the Davao City Council and aims to complete the whole process within the year.