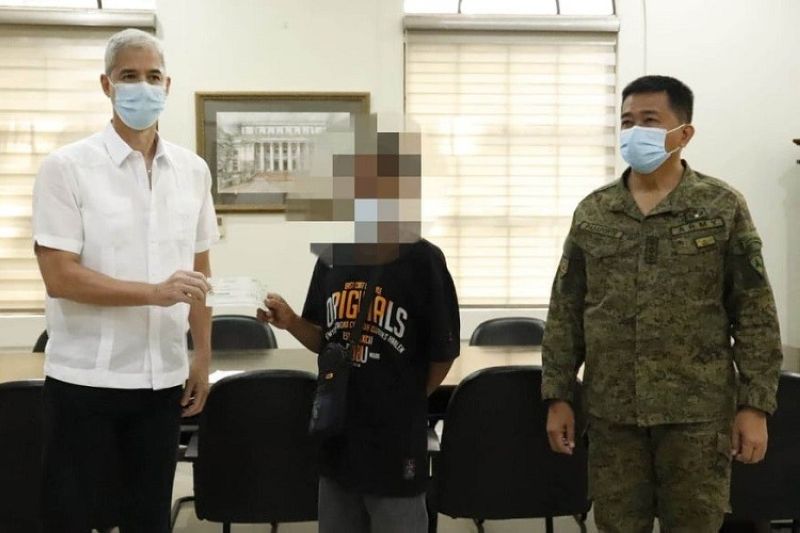 CASH AID. Three former rebels receive a check from the Provincial DILG amounting to P30,000 each for the “immediate assistance” while they enroll in the Enhanced-Comprehensive Local Integration Program (E-Clip), which provides a complete package of assistance to former rebels. (Contributed photo)

THE Provincial Government of Negros Occidental through the Provincial Peace and Order Council awarded Php 200,000 worth of “Cash and Remuneration Assistance” to three former rebels who have surrendered to the 62nd Infantry Battalion.

Each former rebel received a check from the Provincial Department of the Interior and Local Government amounting to P30,000 for the “immediate assistance” that will serve as support for the mobilization expenses of the ex-rebel while his enrolment in the program is being processed. The immediate assistance is a component benefit of the Enhanced-Comprehensive Local Integration Program (E-Clip), which provides a complete package of assistance to former rebels who were members of the Communist Party of the Philippines (CPP), New People’s Army (NPA) and National Democratic Front (NDF) that surrendered to the government as well as their family members.

The three former rebels who turned-in their firearms received the corresponding assessed cash value of their weapons. The Office of the Provincial Governor through Provincial Peace and Development Order (PPDO) released the amount of P110,000 for said firearms.

Lacson said in his message to the former rebels, “I hope that the cash assistance you received as a former rebel will benefit you and your family in living a new life and you will serve as a living testament of the government’s sincerity to its mission."

Meanwhile, Colonel Inocencio Pasaporte, 303rd Infantry Brigade Commander said, “your Army, together with the local government units in Negros Occidental, hopes that with the firearms remuneration and other government programs for peace and development, more rebels and active NPAs will be enticed to yield to the government and take advantage of the many benefits waiting for them upon their surrender. Lay down your arms, return to the folds of the law and avail the government’s Enhanced Comprehensive Local Integration Program.

"Live a normal and peaceful life, and do not be deceived by the CNT’s fake promises of a better future," he added.