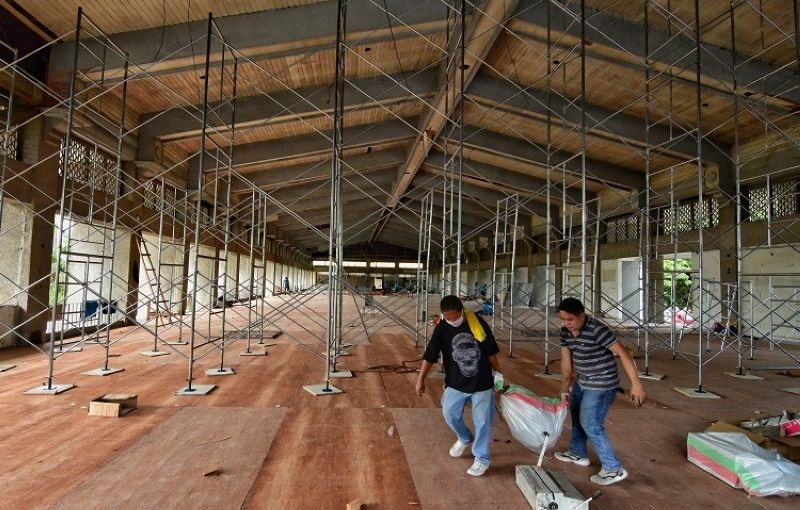 DPWH-Davao, in a Facebook post, said the two waiting facilities were constructed to serve as holding areas for passengers while waiting for their Covid-19 test results.

The agency said these facilities, once completed, shall have a 300-bed capacity.

Davao City Mayor Sara Duterte-Carpio said on Friday, July 31, in a radio interview, that one facility will be constructed at the old Davao airport in Sasa, while the other one is in front of the current airport in CP Garcia Highway.

The mayor said the City Government, along with DPWH-Davao and the Civil Aviation Authority of the Philippines (Caap), identified the old airport and the vacant lot at the current airport as sites for the isolation centers.

The construction of the holding facilities is in response to the increasing number of inbound flights at the airports.

Duterte-Carpio, in a previous radio interview, ordered Caap not to allow arriving passengers to leave the airport without securing a negative reverse transcription-polymerase chain reaction (RT-PCR) taken within 72 hours from the point of origin.

Passengers with no RT-PCR tests will be tested for free but will be ordered to stay at the city's prepared holding facilities while waiting for a maximum of 48 hours for their test result.

Aside from the regular commercial passengers, other sweeper flight passengers, such as returning overseas Filipinos (ROFs) and locally stranded individuals (LSIs), will also be housed in the waiting facilities.

DPWH, meanwhile, said the current airport's facility will be composed of 20 airconditioned megatents at ten rooms per tent with individual toilets and can accommodate up to 200 persons, while the one at the old airport terminal can accommodate 100.

The mayor said the 20 tents are expected to be fully operational by the first week of September 2020.

For now, she said three tents can be used beginning August 6.

DPWH-Davao Director Allan Borromeo said the construction of the facilities is in response to the department’s mandate in the Bayanihan We Heal as One Act.

“The Regional Office is working hand in hand with LGUs (local government units) in ensuring that we will provide our people with adequate infrastructure support during these hard times. We can assure OFWs, LSIs and regular airline passengers that they will complete their temporary isolation in a safe and restful environment," Borromeo said.