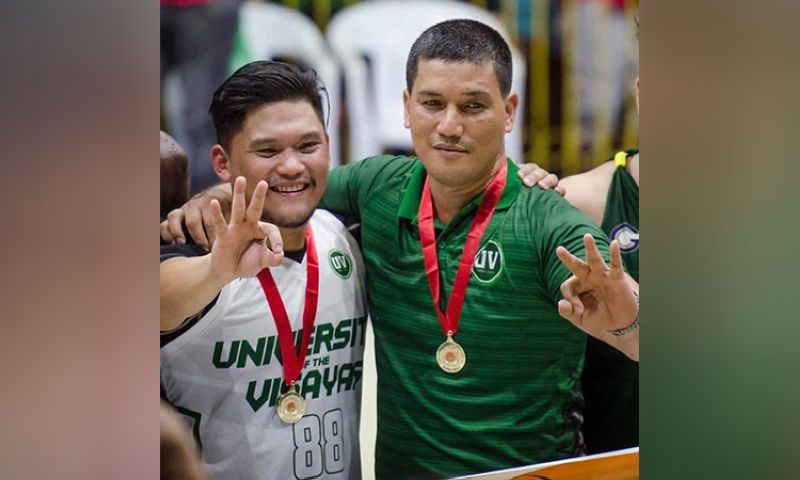 CEBU. UV’s multi-titled head coach Gary Cortes, seen here with Green Lancers team manager and Talisay City Mayor Gerald Anthony Gullas, had previously predicted that a lot of players would transfer after the Cesafi announced it was cancelling the 2020 seasons. Little did he know that his prediction would come true. (Samsam Gullas FB)

NOT long after the Cebu Schools Athletic Foundation Inc. (Cesafi) announced that it was canceling the 2020 season, the University of the Visayas (UV) Green Lancers’ multi-titled head coach Gary Cortes posted on his social media account that a lot of players might soon leave their respective schools to look for greener pastures.

Little did he know that his statement would prove prophetic.

Over on the collegiate level, UV has lost its two best players with Jancork Cabahug and Gabriel Cometa committing to join UP and San Beda, respectively.

“When the Cesafi declared that it was cancelling the season this year, I wrote on my Facebook page that we better start counting how many players we’re going to lose on each team,” said Cortes. “And I was not mistaken in my assertion.”

Cortes, who led the Green Lancers to three straight Cesafi titles, surmised that the league might have been better off if it took a “wait and see” approach rather than cancelling it outright.

“Maybe they should have held out for a little bit and hoped for a Covid-19 vaccine or something later this year or in the early part of 2021, so that the players wouldn’t get disheartened. After all, the Cesafi is the only tournament the schools and the players prepare for,” Cortes added.

Southwestern University-Phinma head coach Mike Reyes added he couldn’t blame the players for making the choice to try their luck in Manila.

“We can’t blame them. It is what it is.” said Reyes, who steered the Cobras to the 2019 men’s basketball championship.

When asked what he thought might be the reason for this sudden wave of transfers, Reyes said the astounding number of tournaments of Manila has a lot to do with it.

“I think it’s because of the frequency of tournaments in Manila. There are a lot of tournaments there, which means more opportunities to get better. And the level of competition there is fierce,” Reyes explained.

Cortes added that he hopes the Cesafi would adopt what the Land Transportation Franchising and Regulatory Board (LTFRB) is batting for: modernization.

“If the Cesafi doesn’t adjust or doesn’t do anything to attract more fans to watch the games, then there won’t be any prominent sponsors who will step up to support the schools and the league itself,” said Cortes.

“Manila is not an easy place to be especially if you go there without any assurances. So to those players who want to go to Manila, I really must advise you to think long and hard about it, and to really ask themselves if they’re ready to compete at the level of basketball that is being played at there,” said Garcia. (JNP)