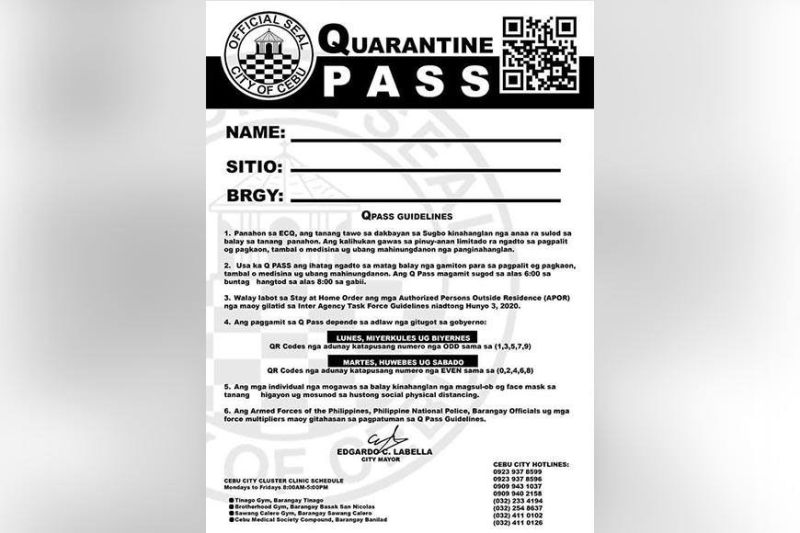 THE SITUATION. As early as last May 31, 2020, Interior and Local Government Secretary Eduardo Año said community quarantine (CQ) passes are no longer needed in localities under GCQ or general community quarantine. Part of the easing of restrictions in movement of people to reopen the economy, he said.

That was made clear by DILG, which oversees the police that guards checkpoints and patrols the streets. In Cebu City, however, which has shifted from modified enhanced quarantine to GCQ starting August 1, the CQ passes are still required.

The executive order issued last July 31 by Mayor Edgardo Labella – E.O. #086 2020 – expressly requires APORs, authorized persons outside the residence, each to “bring along with him/her” the quarantine pass issued by City Hall. Other persons exempted from the stay-at-home order, who are workers at essential or allowed-to-reopen businesses, may present their company ID or certificate of employment.

Most affected by the CQ pass requirement are those aged below 21 and 60 and above who have no other recognized paper to show except the City Hall ID.

IATF drops the CQ pass rule for GCQ localities but also authorizes the local government to require it (1) in critical and buffer zones and (2) when demanded by local conditions.

Mayor Labella, bitten by the experience of returning to ECQ or enhanced quarantine after having gone through GCQ, is wary about a new surge of infections that relaxation of rules could cause.

By requiring the CQ pass, Labella wants the stay-home rule tightly observed, even as more workers are going out because of additional businesses that reopen. The CQ pass limits the authorized person to one per household and not more than three outings in a week, except Sunday.

In sum, an LGU decides whether to junk the CQ pass or keep it even under the city’s new status. The mayor obviously wants fewer persons out of their homes.

LGUs’ CHOICE. In Cebu island, local governments under GCQ from August 1 to 15 are Lapu-Lapu City, Mandaue City, Talisay City, and the towns of Minglanilla and Consolacion. The other cities and towns of the province are under MGCQ.

But, like Cebu City, all the local governments have the option that Cebu City enjoys, to require or do away with quarantine pass. MGCQ’d Davao City junks the CQ pass starting tomorrow.

The option though does not apply to other health protocols that LGUs under quarantine are obliged to follow under the omnibus guidelines of IATF-EID (Inter-Agency Task Force on Emerging Infectious Diseases).

The rules include the mandatory wearing of face masks in public places and workplace and physical distancing, especially in public vehicles.