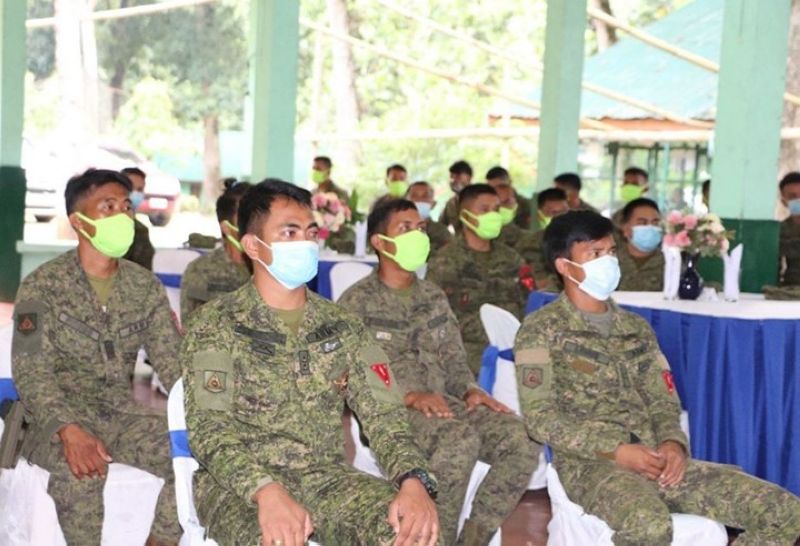 ZAMBOANGA. Major General Generoso Ponio, commander of the 1st Infantry Division, awarded the distinguish personnel of the 53rd Infantry Battalion (IB) for their meritorious feat against the New People’s Army (NPA). A photo handout shows some of the awardee officers and enlisted men of the 53IB. (SunStar Zamboanga)

The awarding ceremony was held when Major General Generoso Ponio, 1ID commander, visited the headquarters of the 53IB Wednesday, July 29.

Awarded were officers and enlisted personnel of the 53IB’s Alpha and Charlie Companies, and the Scout Platoon.

In the recent months, the 53IB, as part of Task Unit “KAISER” of the 102nd Infantry Brigade (IB), has been successful in shaping the operational environment in its area of operations, resulting in multiple skirmishes against the New People’s Army (NPA) rebels, most of which yielded firearms and neutralized enemy personalities.

Part of their combat achievement were the capture of high-powered firearms such as caliber .50-caliber Sniper Rifle, two M-16 assault rifles, and an improvised shotgun; anti-personnel mines and improvised explosive device; and subversive documents and various war materiel.

Lieutenant Colonel Jo-ar Herrera, 53IB commander, has thanked Ponio for his time, saying that the latter’s visit will inspire the troops to “be more, do more, and perform more.”

“Every Commander's visit not only boosts the morale of his soldiers, but also inspires them to better perform their sworn duties to God, country, and people,” Herrera added.

Ponio has encouraged everyone to emulate the heroic acts of the awardees, “because not only will this give pride to your unit, but also to the Army and the Armed Forces of the Philippines as a whole. (SunStar Zamboanga)