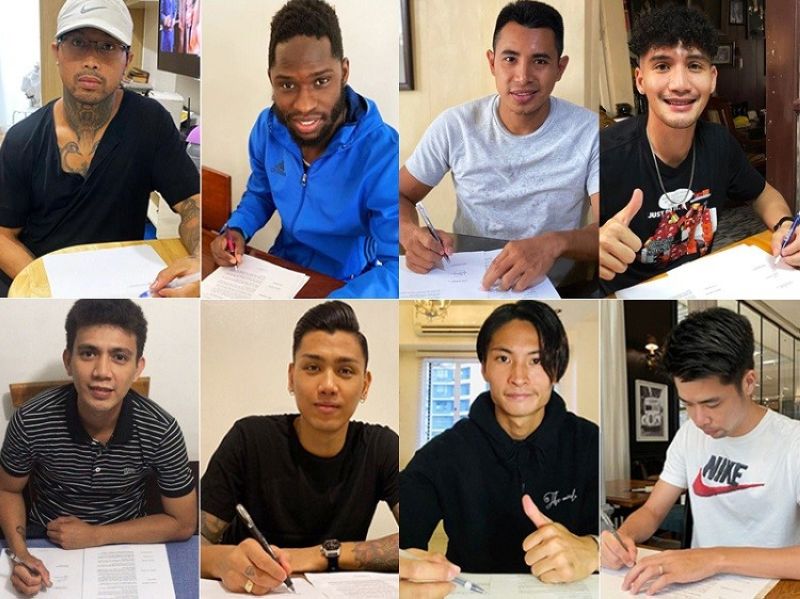 The 30-year-old journeyman Marasigan has been playing as a professional footballer since 2012--suited up with Zulte Waregem II in Belgium for a season. In 2013, he joined Pasargad in the defunct United Football League (UFL) then transferred to Loyola Meralco Sparks in the same year before he was tapped by Ceres-La Salle FC in 2013 to 2015.

In the next two years, the Cebu-born midfielder played for Belgian clubs Olsa Brakel and Temse. In 2017, he saw action in the Philippines Football League (PFL) for the Ilocos United, Global Cebu and Ceres–Negros last season.

Meanwhile, Senegal-born Robert Mendy moved to the Philippines in 2013 and started his football career in the UFL with Green Archers United then Kaya-Iloilo.

Last year, the 33-year-old striker played for Malaysian club UiTM before suiting up for Ceres-Negros where he had a great season.

Pasinabo started his playing career with the University of St. La Salle back in 2013. In the UFL, he started with Green Archers United then Ceres-La Salle, Kaya FC-Iloilo and rejoined with Ceres-Negros last year.

Another homegrown talent is 24-year-old forward Dutosme who started playing at the age of 10 back in Bukidnon and later played for the University of St. La Salle in Bacolod. He began his pro career with Ceres-Negros in 2017.

Iloilo-pride 26-year-old midfielder Robles from Calinog town played his last season for Ceres-Negros. He returns to the field with UCFC.

Meanwhile, Rome-born Villanueva started playing for S.S.Lazio. He played for Italian club Ostia Mare before signing with Global Cebu and transferred to Davao Aguilas (2018) and later Ceres-Negros last year. The 28-year-old defensive midfielder is expected to help the United City this season.

Minegishi began his pro career in 2015 with Global Cebu before moving to Thailand’s Pattaya United (2018) and JL Chiangmai United (2019), and later to Ceres-Negros.

Meanwhile, Odawara began his career in the Philippines with JPV Marikina from 2015 to 2017 before moving to Davao Aguilas (2018), and last year with Ceres-Negros.

More signings are expected with United City in the coming days.