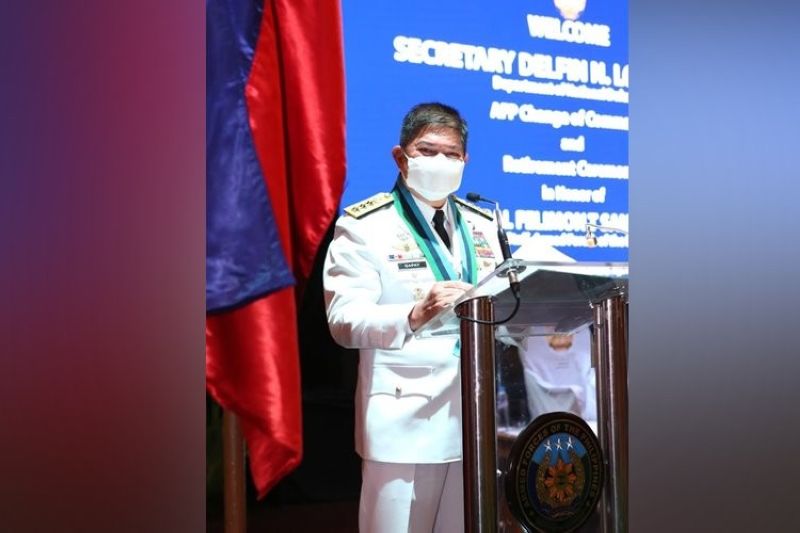 MANILA. New Armed Forces Chief of Staff Gilbert Gapay delivers a speech during the turnover of command on August 3, 2020. (Photo from AFP)

NEW Armed Forces of the Philippines (AFP) Chief of Staff Gilbert Gapay on Monday, August 3, 2020, vowed that the military will prioritize the implementation of the recently passed Anti-Terrorism Act of 2020 despite the coronavirus disease 2019 (Covid-19) pandemic.

In a press conference after the turnover of command ceremony, Gapay said they were proposing the inclusion of social media regulations in the law’s Implementing rules and regulations.

He noted that terrorist groups are taking advantage of social media to radicalize the youth and plan their attacks.

"We will be providing some inputs on countering violent extremism and likewise maybe even regulating social media. This is the platform now being used by the terrorists to radicalize and even plan terrorist acts," Gapay said.

"That's why we need to have specific provisions in the IRR pertaining to regulating the use of social media and, of course, likewise regulating materials in the manufacture of IEDs," he added.

He said he will also suggest the strengthening of information sharing between the AFP and the local and foreign counterparts as terrorism is a worldwide problem.

Gapay also noted the strengthening of maritime security to prevent foreign terrorists from entering the country.

Defense Secretary Delfin Lorenzana said the law’s IRR is still a work in progress but he assured that they will consider the proposal of the AFP.

Gapay, meanwhile, said territorial disputes especially in the West Philippine Sea (South China Sea) will be dealt with in accordance to the rule of law “without undermining the country’s national interest.”

He said there is no order from the higher office to stop the conduct of patrolling in the disputed area.

He noted that the administration is enforcing a "realistic and pragmatic approach" in addressing the issues with the neighboring country.

"Still, as part of the national direction in addressing the West Philippine Sea issue, we still abide by resolving this conflict or issues peacefully and based on the rule of law. That's our guarding principles and as we perform our mandate in upholding our sovereignty and preserving our territorial integrity in that Western part of the country," he said.

Gapay said he expects the good relationship of the Philippines with China to continue despite the territorial dispute.

He said the good relationship between the two countries is indicated by the continuous help from China to the Philippines amid the pandemic especially the donation of personal protective equipment and medical supplies.

Meantime, Gapay said in order to continue upholding the country’s sovereignty as well as the integrity of the national territory, he will push further for the modernization of the AFP.

“As your new CSAFP, I will hit the ground running to sustain the momentum in winning the peace, stability, and development—embodying a world-class Armed Forces, source of national pride,” he said.

“We have done well in our initiatives in the first and second quarter of 2020. But that is not enough. We will continue our pursuit of operational effectiveness, organizational efficiency, personnel development and well-being, and stakeholder’s collaboration,” he added.

Gapay said he will sustain and continue the momentum in making the Armed Forces world-class and a source of national pride and to pursue operational effectiveness, organizational efficiency, personnel development and well-being, and a good relationship and coordination with the stakeholders.

Gapay also expressed support for the country’s “Build, Build, Build” initiative and those that are geared towards socio-economic growth.

“Whatever challenge lies ahead, be it territorial integrity, terrorism, the wrath of nature, or even infectious diseases, we shall not falter. Hindi magpapatinag ang inyong AFP. We shall carry out our tasks by exemplifying our brand of honor, service, and patriotism—for this is our lifeblood. They are what makes us the AFP,” he said.

“To our countrymen, continue to fight with us in the war against terrorism and the pandemic,” he added. (SunStar Philippines)