Doctors say request for testing was made in April yet 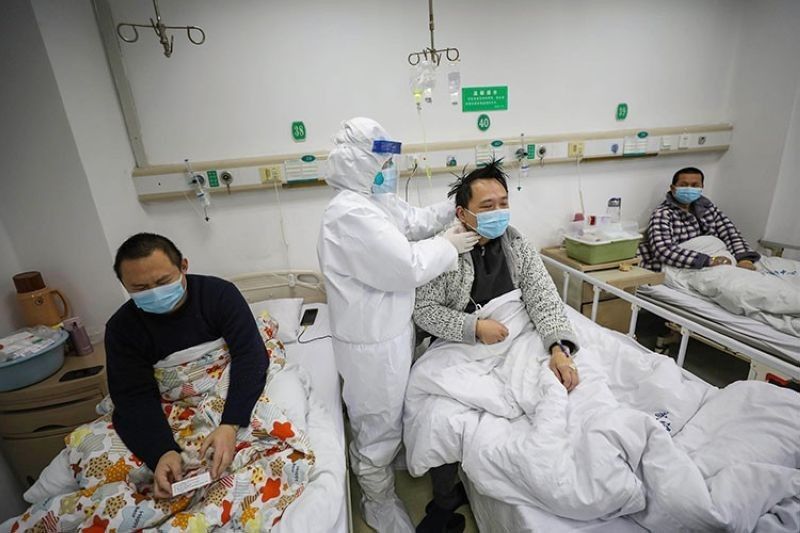 CHINA. In this February 13, 2020 photo, a doctor checks a patient in a hospital designated for critical Covid-19 patients, in Wuhan. (File Photo)

MEDICAL frontliners clarified that their call for testing and other benefits was first made in April 2020, not during the virtual press conference that they held Saturday, August 1, 2020.

Their requests, however, were left unheeded by the Inter-Agency Task Force (IATF) for the Management of Emerging Infectious Diseases and the Department of Health (DOH).

The Philippine College of Physicians (PCP) issued this clarification in another letter addressed to President Rodrigo Duterte on Monday, August 3, 2020 and stressed that they did not intend to humiliate the administration.

“Lest it be forgotten by our health authorities, the PCP sent a letter to DOH (Department of Health) sometime in April 2020 requesting that test kits be reserved and used on the HCWs (healthcare workers) who have been instructed to go on duty on a two-week rotation,” the group stated.

“Three months have passed since that time and after other requests like quarantine facilities for HCW, insurance coverage and protection from verbal castigation and physical violence to name a few have been left unanswered, we patiently held on as soldiers in battle,” they added.

Granting these requests early on would have made their “harrowing experiences bearable”, the group said.

Had they known that the President was not briefed in detail about the healthcare workers’ situation on the ground, they said they would have sought a private audience with Duterte.

The group also clarified that they did not call for a revolution. Neither did they threaten to leave their patients.

They apologized for the way their message was perceived.

“By training and our reserved nature, the likes of us are not used to giving out demands or ultimatums but if our requests and observations were taken as an assertive display of indignation, we apologize for the way the message was taken in a negative light,” they wrote.

The group said they were “taken aback and surprised” when the President, in his address to the nation aired at close to midnight Sunday, August 2, “highlighted...that we are indispensable but not irreplaceable”.

Posted by Philippine College of Physicians on Sunday, August 2, 2020

Duterte alternated between appealing to the medical frontliners to continue serving the people and chiding them for airing their concerns via a press conference instead of seeking a dialogue with him.

The President, nonetheless, gave the go signal for the executive department to push for the inclusion in the proposed Bayanihan 2 law the benefits for the healthcare workers.

Healthcare workers who get infected and manifest mild symptoms of Covid-19 will also get cash assistance of P10,000.

Under the Bayanihan to Heal as One Act, which expired on June 24, 2020, healthcare workers who succumb to Covid-19 are entitled to an assistance of P1 million while those who fall critically or severely ill get P100,000.

Duterte also approved the recommendation of the IATF, in response to the medical community's plea, to revert Metro Manila and four provinces to modified enhanced community quarantine until August 15, 2020.

The President met with key members of his Cabinet and IATF to discuss the PCP’s distress call and appeal for tighter restrictions in Metro Manila, where new causes of infection had been increasing by more than 2,000 a day.

The PCP said it called for a time-out through a two-week stricter lockdown not only to give reprieve to exhausted healthcare workers “but mainly to assure the highest quality of care needed for the moderate to critically ill patients”.

Meanwhile, Presidential Spokesperson Harry Roque explained on Monday that the President merely wanted to stress that the medical frontliners should have gone to him before airing their concerns in public.

Roque also said the President was reacting to criticisms from the opposition and the circulation of a “revolution song”.