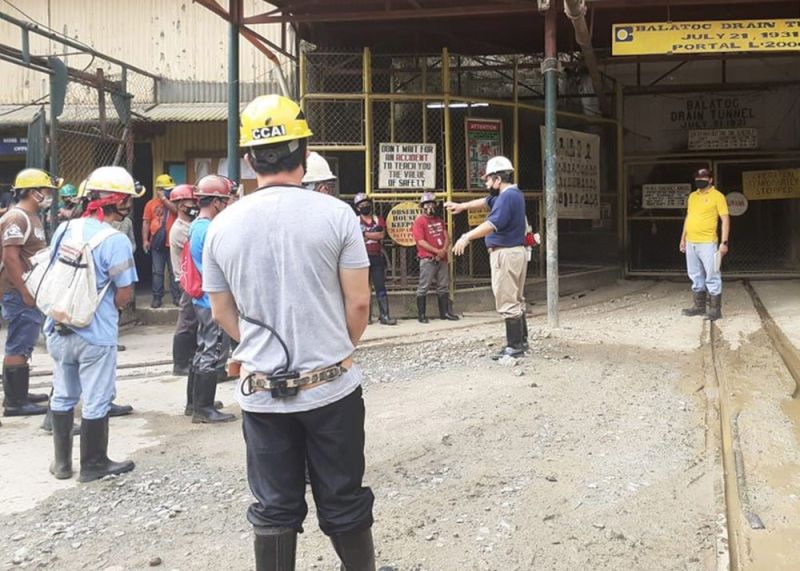 AMID restrictions brought about by the coronavirus disease (Covid-19) pandemic, mining firms in Benguet have resumed operations following health protocols.

Lawyer Froilan Lawilao, head of administration of Benguet Corporation (BC), said last week that when the enhanced community quarantine (ECQ) was imposed in Luzon on March 17, the mining company also suspended operations while maintaining a skeletal workforce.

Operation of the oldest mine in the country resumed during the modified general community quarantine (MGCQ).

It was in 2002 when Benguet Corporation ventured into Acupan Contract Mining Project following a request from the community endorsed by the local government unit of Itogon and the Mines and Geosciences Bureau.

The community-based project is a one-of-a-kind partnership with the Indigenous Peoples and community who formed themselves into associations where they are allowed to mine in identified mining areas.

The members are small-scale and displaced miners or former employees after the suspension of the big operation on 1992.

Benguet Corporation has 300 employees who are currently working closely with the 1,500 contract miners employed by the contractors, but the mining firm was contemplating on totally shutting down during the ECQ period due to the restricted transport of raw materials coming from other parts of the country and abroad.

"Benguet Corporation was contemplating the suspension of operations because of the constrained materials but we didn't push through. We considered the big factors such as the livelihood of employees during the pandemic," Lawilao said.

Lawilao said workers from outside Itogon are also barred from entering the municipality and Barangay Virac due to the strict implementation of quarantine protocols.

Following a consultation with the local government unit, workers coming from Baguio City were given quarters in Balatoc [barangay Virac] to minimize their entry and exit in the town.

"They are only allowed to go home once a week after securing permits and health declarations from LGU and the company's clinic," added Lawilao.

Lawilao said the number one protocol and guidelines for miners and employees include practicing social distancing, practicing proper hygiene and wearing of mask.

"In coordination with the contractors, instead of their mining areas that have 10 miners, we limited that to half, to avoid crowd inside the mining tunnels," he added.

From March to May 30, LCMC recorded the highest loss with P138 million, ISRI with P134 million and Benguet Corp. with P5 million.

Fay Apil, MGB-Cordillera director, said these companies stopped their mining operations during the ECQ while PMC enforced strict protocols of no entry and exit from the mining site and continue its operations while observing quarantine operational procedures amidst the pandemic.

"With the pandemic affected production, affected mga taxes that are paid," Apil said.

Mining companies in the region reportedly aligned close to P20 million from its social development and management program (SDMP) for the Covid-19 crisis.

With Benguet transitioning to MGCQ on July 16, Itogon reiterated small-scale mining activities remain prohibited based on the Omnibus Guidelines on the Implementation of Community Quarantine provided for IATF, as well as other issuances by the National Government.

In May, Itogon Mayor Victorio Palangdan called on the National Government to reconsider decision for the re-opening of the small-scale mining industry to help the affected residents. (Lauren Alimondo/With Philippine Information Agency-Cordillera)