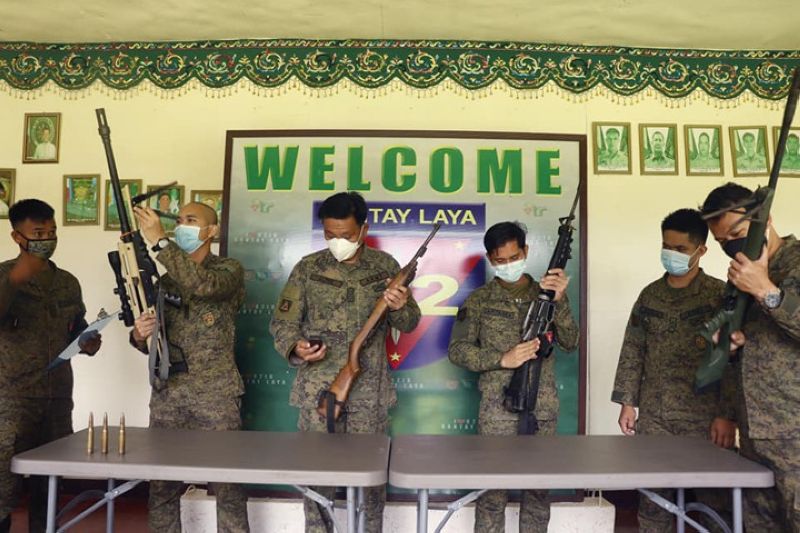 ZAMBOANGA. Two town officials in the province of Lanao del Sur turnover Saturday, August 1, four high-powered firearms to military authorities in the province. A photo handout shows Lt. Col. Rafman Altre, 82nd Infantry Battalion commander (3rd from left) leads the inspection of the firearms that were turned over to his command. (SunStar Zamboanga)

TWO towns officials in Lanao del Sur province have turned over four high-power firearms to military authorities as they expressed support to the campaign of President Rodrigo Duterte in eliminating loose firearms in the country.

Gauraki underscored the importance of keeping her town safe from loose firearms.

“Eradicating culture of violence will pave the way to a more peaceful and more conducive for development municipality” she added.

On the other hand, Mayor Cosain Capal of Tagoloan II, Lanao del Sur has turned over Saturday, August 1, one M16A1 Elisco rifle and one caliber 30 US M1 Carbine with one (1) magazine.

Capal has thanked the military for the support being extended to his municipality as they saturate the town on information drive against the proliferation of loose firearms.

Lieutenant Colonel Rafman Altre, 82nd Infantry Battalion (IB) commander, lauded the efforts of the two town chiefs and motivated all municipal mayors under the area of operations of 82IB to be more relentless in putting a stop against the proliferation of loose firearms.

“The efforts of Kapai and Tagoloan II are contributing a lot in our quest for a just and lasting peace in the province,” Altre said.

“May their initiatives be replicated and be an example to other municipalities,” he added. (SunStar Zamboanga)