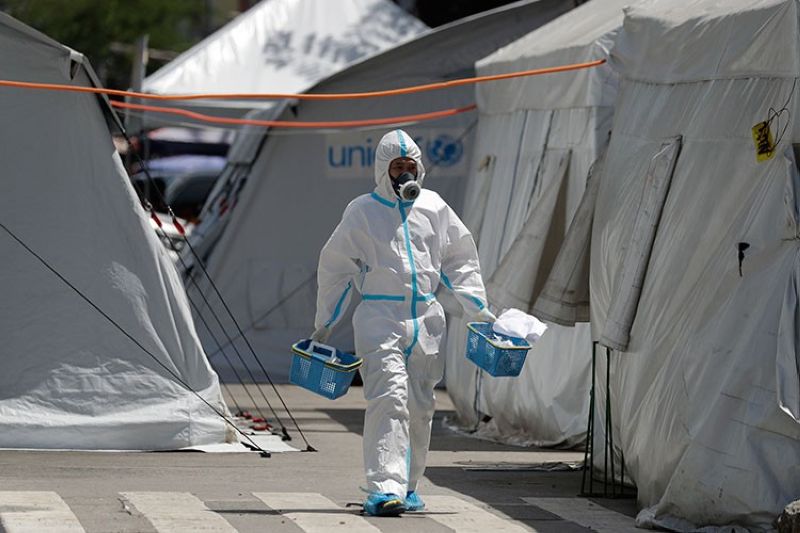 MANILA. A health worker wearing protective suits walks in between tents at a parking lot that has been converted into an extension of the Gat Andres Bonifacio Memorial Medical Center in Manila, Philippines on Monday, August 3, 2020. (AP)

ON THE first day of the implementation of tighter quarantine measures in the National Capital Region (NCR) and four Luzon provinces, the Department of Health (DOH) reported 6,352 additional cases of coronavirus infection, so far the biggest increase in a single day since the Philippines confirmed its first Covid-19 case.

Almost half of the new cases, or 3,139, came from NCR or Metro Manila.

The agency reported 11 additional mortalities, raising the death toll to 2,115.

The new cases brought the total case count to 112,593, of which 44,429 were active cases or those who were still in the hospitals and in quarantine.

DOH said 89 duplicates were removed from the case count.

Laguna, Cavite and Rizal - which form part of Calabarzon - are also under modified enhanced community quarantine (MECQ) like Metro Manila and the province of Bulacan.

Of the 6,352 additional cases collated from 80 testing laboratories Tuesday, 3,941 occurred in the last two weeks or from July 22 to August 4.

NCR and Calabarzon topped the regions in terms of newly reported cases based on onset of illness since July.

Of the 11 deaths reported Tuesday, five were from Central Visayas, two from Zamboanga Peninsula, two from Davao, one from Calabarzon and one from NCR.

One death occurred in August, eight in July, one in June and one in May. (Marites Villamor-Ilano/SunStar Philippines)