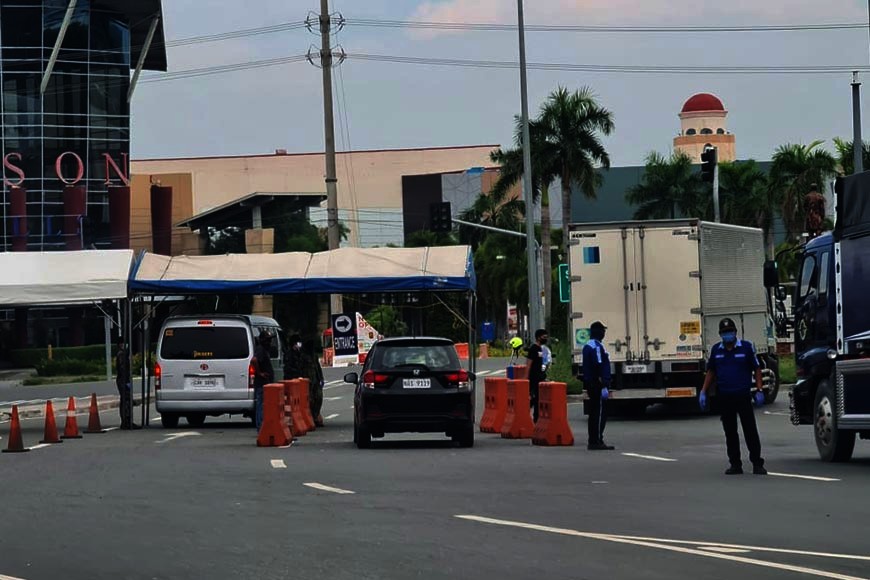 PAMPANGA. Policemen and Blue Marshals check vehicles entering the City of San Fernando via NLEX, as strict health and safety protocols are being implemented in Pampanga following the MECQ status of Bulacan, Metro Manila, Cavite and Laguna. (Chris Navarro)

MUNICIPALITIES located at the boundary of Pampanga and Bulacan have strengthened their border control points as the reversion to modified enhanced community quarantine (MECQ) in the whole of Bulacan province took effect Tuesday, August 4.

The local government units of Apalit, San Simon and Candaba ordered the re-establishment of checkpoints in their respective jurisdiction to limit the movement of people from outside the province.

Apalit Municipal Inter-Agency Task Force Spokesperson Glenn Danting said strict guarding of the checkpoint installed in between Barangay Sulipan in Apalit and Calumpit, Bulacan is being implemented in the next 15 days.

Apalit town is the main entry point of Bulacan province and other areas in the south to Pampanga when passing through the MacArthur Highway.

Punsalan also said that entry and exit points in Barangay Concepcion in Apalit going to and from Baliwag, Bulacan are also on lockdown for the duration of the MECQ in Bulacan province.

The border control points in Candaba town going to different municipalities in Bulacan province were also re-established as early as Monday noon, August 3, to regulate the entry and exit of people.

Mayor Rene Maglanque said all border control points will be strictly manned by joint forces of the Philippine National Police and barangay to ensure that only authorized persons can come into their municipalities.

Those who can come in the province must still accomplish health forms for contact tracing purposes.

The MECQ in Bulacan, National Capital Region, Cavite, Rizal and Laguna is effective until August 18, according to the national IATF.