PhilHealth seen to slip into red in 2021 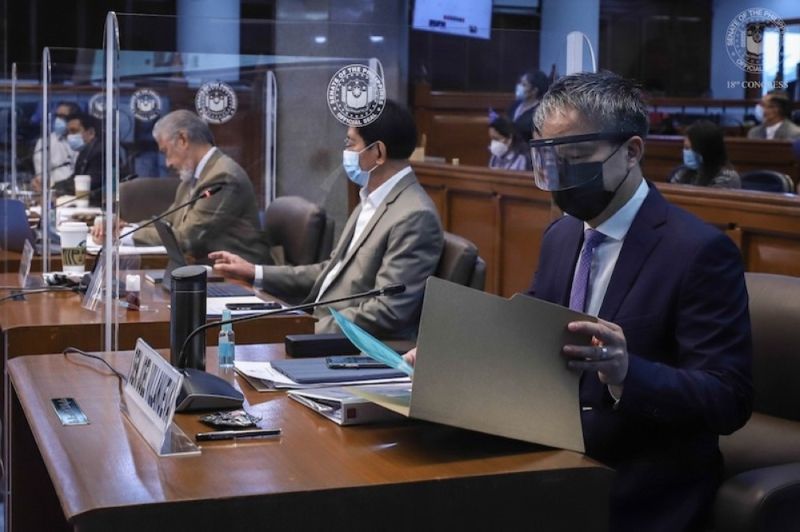 MANILA. The Senate convenes as a committee of the whole on August 4, 2020 to investigate allegations of corruption at PhilHealth. (Photo from Senate)

AN OFFICIAL of the Philippine Health Insurance Corporation (PhilHealth) admitted on Tuesday, August 4, 2020, that the state-owned company could be operating in the red by 2021 because of lesser contributions and a large amount of Covid-19 payouts.

“We expect that by 2021, we will be in the red already,” she told the Senate committee of the whole during its investigation into alleged widespread corruption at the state insurance company.

“What do you have in mind to save PhilHealth from collapsing?” Drilon asked Santiago.

Santiago replied by saying that it is now up to the government to "keep PhilHealth afloat."

She said that unless the government increases its yearly P71-billion subsidy, PhilHealth will inevitably collapse.

“This is really a cause of concern for the entire country. I am dumbfounded. I do not know what question to ask next because of what I heard, " Drilon said.

In a televised public briefing, Presidential Spokesperson Harry Roque assured that the government will provide additional funds for PhilHealth.

Now talking to PhilHealth President and CEO Ricardo Morales, Drilon said the agency faces a lot of corruption issues because it does not follow simple audit rules like liquidation of funds.

“We are in this mess because of Philhealth’s non-compliance with rules, including a simple COA (Commission on Audit) rule. That is why we have all these problems because you disregard all the rules designed to protect public funds,” Drilon said.

“Per COA rules, you must first liquidate before further advances be made,” Drilon said.

"It is absolutely outrageous and offensive that in the midst of our fight against a dreaded disease that has so far infected over 100,000 of our people, killed over 2,000 people, claimed over five million jobs, and brought hunger to over 5 million families, the agency mandated to provide health insurance coverage and ensure accessible health care services for Filipinos continues to be haunted by controversies," the lawmaker said.

Lawmakers in the House of Representatives condemned PhilHealth's admission that its reserve fund will be used up by 2021.

According to House committee on ways and means chairman and Albay Representative Joey Salceda, PhilHealth must be held accountable for its mismanagement of public funds.

“While we understand the extraordinary burden that Covid-19 has placed on the insurance system, and we in Congress have expressed willingness to infuse capitalization to covide the Covid-attributable upsurge in claims, we have to hold the PhilHealth to account for its apparent mismanagement of public finances,” Salceda said.

Salceda added that the state-run health insurance system must be managed to avoid the same scenario in the future.

“Pandemics like Covid-19 are a fact of human history. Something like this will happen again. That is why PhilHealth has to be effectively managed in good times, so that the system is prepared for bad times like these,” he said.

“I am extremely frustrated to see PhilHealth not doing enough of its share of the work in delivering universal health care. We’ve been doing our jobs and have handed them almost every legislative reform they request. It is time they do their jobs well,” he added.

Deputy House Minority leader and Bayan Muna Representative Carlos Isagani Zarate reiterated his call to “put the national budget directly to hospitals and not to PhilHealth.”

“As it is, PhilHealth seems to be so entrenched in corruption and syndicates that it is hard for us to trust it with people’s money,” Zarate said.

“They can’t even answer why their information technology resources were overpriced as well as overpriced COvid testing and a slew of other anomalies,” he said.

House committee on health chairperson and Quezon Representative Helen Tan does not believe that PhilHealth will go bankrupt by 2021.

The lawmaker stressed that the agency was saving a lot of money due to the decreased utilization of other benefit packages.

“While it is easy to understand that the pandemic has brought a ‘double impact’ of decreasing collections and increasing payouts for the hospitalization of Covid-19 patients, it is hard to think that PhilHealth will be dead horse by next year,” she said. (SunStar Philippines)