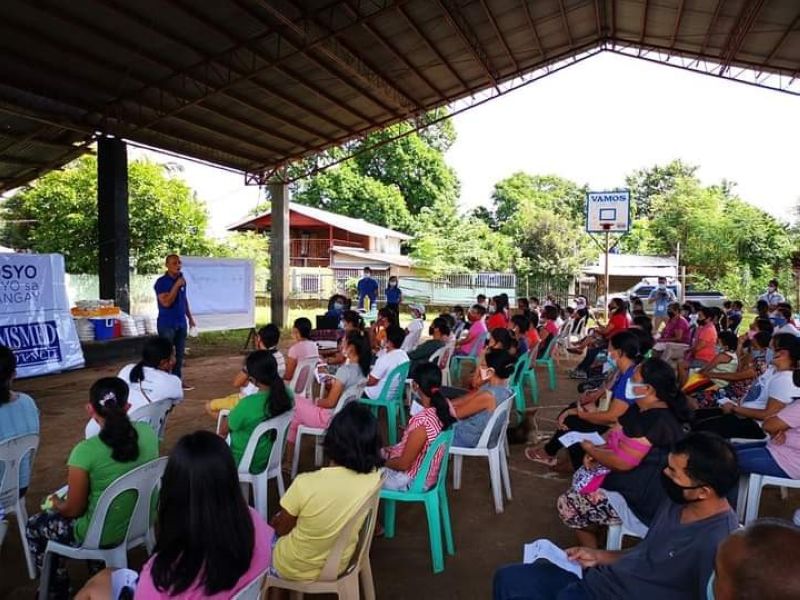 Some 124 MSMEs at Barangay Libas and Camp Clark in Isabela town avail the Livelihood Seeding Program - Negosyo Serbisyo sa Barangay of the Department of Trade and Industry. (Contributed photo)

ONE hundred twenty-four micro, small and medium enterprises (MSMEs) in two barangays of Isabela town have availed of the Livelihood Seeding Program - Negosyo Serbisyo sa Barangay (LSP-NSB) of the Department of Trade and Industry (DTI).

Engiemar Tupas, officer-in-charge industry division chief of DTI-Negros Occidental, said only Barangay Libas was included in the 13 target recipient-barangays in the province this year.

Tupas, however, said they can also cater to MSMEs from nearby barangays.

Participating entrepreneurs were given orientation on the programs and services of the DTI, consumer rights, entrepreneurial mindset, business planning and minimum health protocols.

"Almost all of them are into sari-sari store business now but they do not have proper training on being entrepreneurs," he said, adding that "hence, we will be conducting a basic entrepreneurship seminar as a follow up activity."

The LSP-NSB is a program of the DTI that allows a wider reach of business development assistance by bringing government services closer to the people through partnerships with local government units (LGUs).

Through the Barangay Development Councils (BDCs), the DTI shall help capacitate barangay personnel to provide basic business advisory or information dissemination services to MSMEs in the locality.

Also, the DTI, in partnership with the national government agencies, LGUs, academe, non-government organizations and private sector and through the Negosyo Centers, shall promote ease of doing business and provide access to development services for MSMEs.

In Negros Occidental, the agency has started the implementation of LSP-NSB at Barangay Rizal in San Carlos City last week.

About 100 existing entrepreneurs in the barangay have availed of the program.

Aside from Barangay Libas in Isabela, other recipient-barangays include Bagong Silang in Salvador Benedicto; Poblacion in Toboso; Jonobjonob in Escalante City; Vito in Sagay City; Poblacion in Manapla; Lag-asan in Bago City; Montilla in Moises Padilla, Cabacungan in La Castellana; Buenavista in Himamaylan; Payao in Binalbagan; and another barangay in Calatrava.

Moreover, the DTI said MSME-beneficiaries may include sole proprietors, cooperatives, or sectoral associations that are located in identified barangays, including those in local communist armed conflict-affected areas and vulnerable communities such as the Indigenous Peoples.

Priority assistance shall be given to MSMEs affected by natural and human-induced calamities including health disasters arising from epidemics and pandemics, it added.

Tupas earlier said LSP-NSB aims to increase the awareness and engagement of barangay officials about the services offered by the DTI through the Negosyo Centers.

Also, to conduct business development assistance and services, he added.

It also povides business information and advocacy such as information dissemination, training, seminars and workshops.