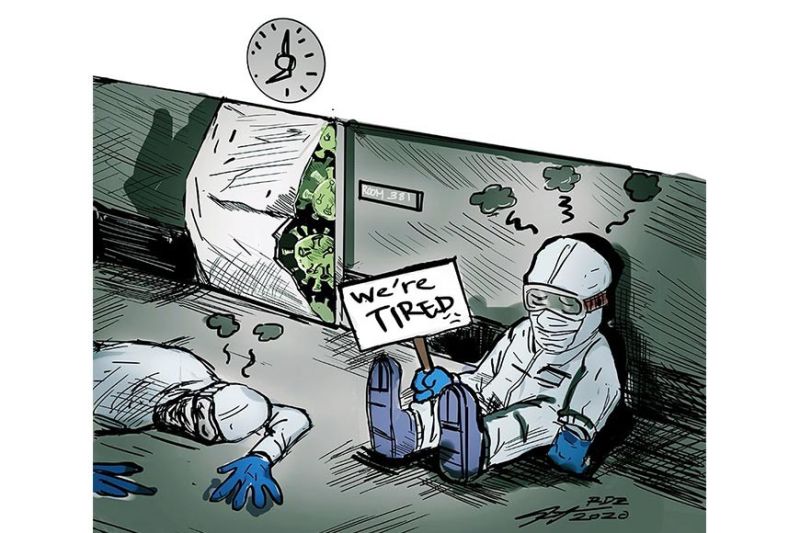 IF YOU were out in the streets on the first Monday since Cebu City was placed under general community quarantine, you would have realized that the “timeout” plea of the Philippine College of Physicians (PCP) and a host of other health workers’ groups absolutely makes sense.

The streets were a perfect illustration of a mad rush. Congestion sprawled all the way from Cebu City to Consolacion town to the north and to as far as Naga City to the south. The implosion was the antithesis of the “voluntary ECQ” drummed up by netizens on social media.

The “voluntary ECQ” became viral with an illustrated set of protocols put out by a former adviser of the government’s anti-Covid-19 task force. It sounded revolutionary on first impression, but the ground scenario apparently shows the opposite. It could not be possible while a big part of the populace aches for economic activity to resume. Times have been hard, debts piled up for some, it should be high time to plunge back into the salt mines. And, yet, there is also the health workers’ plea for a timeout as another weight to juggle in government’s decision-making.

The “voluntary ECQ” makes things arbitrary on the ground, a clear contradiction to what the health workers asked. To recall, PCP’s Dr. Maricar Limpin said the health workers are asking the national leadership not to leave it to the local governments to decide which health measures they are going to pursue. It must be, she said, the Department of Health (DOH) that should orchestrate the whole-of-nation approach to this pandemic. The two-week timeout that the health workers asked for should allow workers to stay home and not expose themselves to risks while supposedly traveling to work. That should disperse the public and break transmission links for at least two weeks, a fair enough space to breathe and for government to review ground measures.

The Cebu scenario last Monday bodes ill for all the efforts the Cebuanos have been doing to solve this health crisis. We have yet to know how our local government responds to Monday’s mad rush or if it had reached its desks for immediate action. Public buses have been coming in waves without implementing physical distancing measures among their passengers. It was a common sight last Monday, many of them stuffed to the rafters with city-bound passengers.

Authorities have been quick in apprehending health protocol violators, and yet what should have been more important is to cut violations right at the bud if only they understood that all these tasks are essentially, supposedly humanitarian, to protect the citizens from potential infection, to save lives.