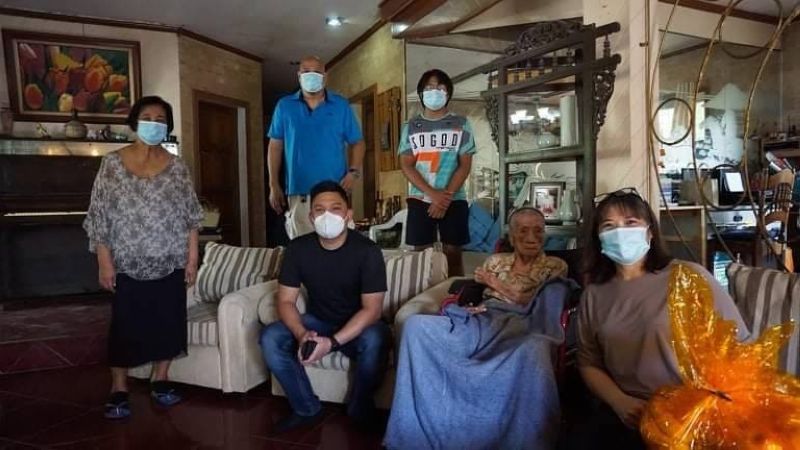 PAYING HIS RESPECTS. Talisay City Mayor Gerald Anthony Gullas Jr. takes a photo with Rizalina Mil, also known as Lola Lin to relatives and friends, at the latter’s home in Barangay Isidro. Mil celebrated her 100th birthday last May. Gullas went to her house on Tuesday, Aug. 4, 2020, to give her P50,000 and a plaque from the City Government. (FROM THE FACEBOOK PAGE OF TALISAY CITY MAYOR GERALD ANTHONY GULLAS JR.)

A RESIDENT of Talisay City, Cebu had a surprise visitor at her house in Barangay Isidro on Tuesday, Aug. 4, 2020.

None other than Mayor Gerald Anthony Gullas Jr. showed up to pay his respects to Rizalina Mil.

Gullas brought along a plaque and P50,000 as belated gifts to Lin from the Talisay City Government, which had passed an ordinance to extend cash aid and a plaque to centenarians.

“For the information of everyone, when our administration started, I always wanted to find time to visit centenarians because it’s truly a blessing from God to reach that age,” the mayor said.

Mil’s secret for reaching such a long and fruitful life is unlike that of other centenarians that he has visited. While almost all of them reached that ripe old age by eating healthy food like vegetables, Mil likes to eat humba, he said. (BBT / PJB)