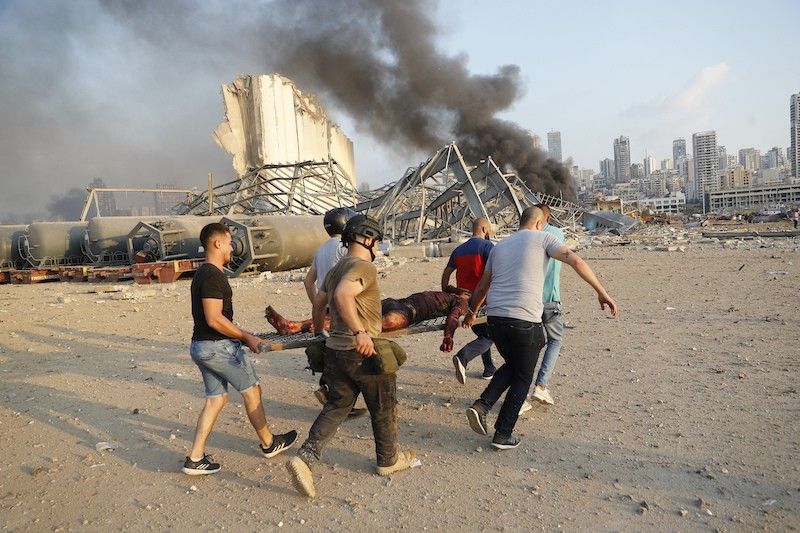 Civilians carry a person at the explosion scene that hit the seaport, in Beirut Lebanon, Tuesday, August 4, 2020. (AP Photo)

(UPDATED) The Department of Foreign Affairs (DFA) said two Filipinos were killed and eight others were injured when two explosions rocked the Port of Beirut in Lebanon Tuesday evening, August 4, 2020.

In a statement Wednesday, August 5, the DFA initially said there were six injured Filipinos, but updated the number to eight a few hours later.

Of the eight, one is in critical but stable condition. Two are recovering at the Philippine Embassy Chancery after receiving treatment at a hospital. The rest sustained minor injuries.

The Philippine Embassy in Beirut, which confirmed the Filipino casualties, said the two Filipinos who are recovering at the Chancery are among 13 Filipino seafarers whose ship was docked about 400 meters from the blast zone.

The other 11 Filipino seafarers were missing as of Wednesday afternoon. Another Filipino, a household service worker, was also reported missing, bringing the number of missing Filipino workers to 12.

The agency said the two explosions occurred at around 6:10 p.m. Tuesday.

More than 100 people were killed and thousands injured. The blasts also cause widespread damage throughout the city,

Lebanese authorities were still investigating the cause of the explosions.

DFA said the embassy is in touch with the Filipino community in Lebanon to assess the situation and provide assistance to any injured Filipinos. (SunStar Philippines from PR)