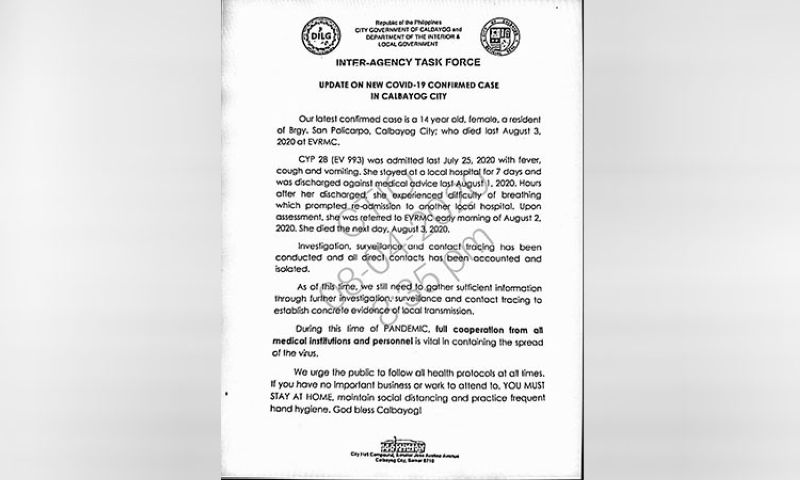 CALBAYOG. The announcement posted by the Calbayog City Information Office on its Facebook page confirming the death of a 14-year-old patient.

ANOTHER coronavirus disease (Covid-19) patient in Eastern Visayas died on Monday, August 3, raising the total number of fatalities in the region to four.

In a statement, Calbayog City Information Office confirmed the death of a 14-year-old female from Barangay San Policarpo due to the respiratory disease.

She stayed in the hospital for seven days and was discharged against medical advice last August 1, 2020, according to the report.

Hours after her discharge, the patient experienced difficulty of breathing, which prompted re-admission to another local healthcare facility.

Upon assessment, she was referred to Eastern Visayas Regional Medical Center in Tacloban City on August 2 and died the following day.

"Investigation, surveillance and contact tracing has been conducted and all direct contacts have been accounted for and isolated. As of this time, we still need to gather sufficient information through further investigation, surveillance, and contact tracing to establish concrete evidence of local transmission," the Calbayog City Information Office said on Tuesday, August 4.

"During this time of the pandemic, full cooperation from all medical institutions and personnel is vital in containing the spread of the virus," it added. (SunStar Philippines)