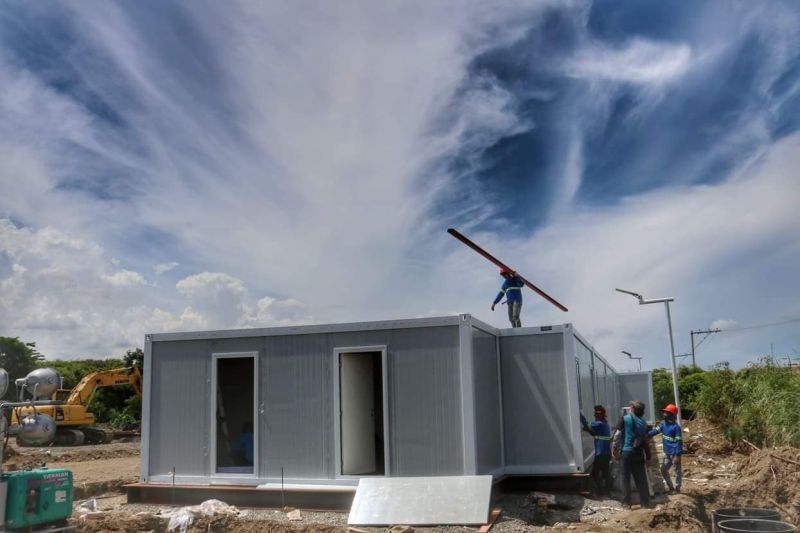 A TOTAL of 301 additional beds for seven new isolation facilities and quarantine centers will be put in place for people found positive for the coronavirus disease 2019 (Covid-19) in Cebu by the end of August this year.

These projects of the Department of Public Works and Highways (DPWH) 7 are among the 11 isolation facilities for Covid-19 patients and off-site dormitories for medical frontliners that are under construction.

All the structures are at least 75 percent complete as of July 31, 2020, according to DPWH 7 Director Edgar Tabacon.

Four of the 11 projects are for medical frontliners; they are intended to add 208 beds. This is the same number of existing beds in off-site dormitories for medical workers attending to Covid-19 patients in Cebu.

Tabacon said they initially targeted to finish constructing the 11 facilities worth P294 million by the end of July. But the DPWH 7 failed to meet the target.

He blamed this on the delayed delivery of shipping container-type materials, the facilities’ structural design. This caused the DPWH 7 to move its target completion date to the fourth week of August.

As of July 31, Tabacon said, the six off-site dormitories with a budget of P84 million for medical personnel are inside the Cebu City Quarantine Center (CCQC) compound at North Reclamation Area in Cebu City. These dormitories are now at around 83.50 percent complete and these will be finished by Aug. 28.

The construction of the P13 million isolation facility for Covid-19 patients in the CCQC compound started last July 13. The DPWH 7 said the structure was 60.55 percent complete; it is expected to be finished by Aug. 17.

Tabacon had said earlier that the isolation facility was supposed to be built in the Cebu City Medical Center compound on N. Bacalso Ave. But the lack of space forced the DPWH 7 to relocate the project.

The DPWH 7 is also building off-site dormitories worth P28 million for medical personnel and two isolation facilities worth P26 million for Covid-19 patients in the Hoops Dome compound in Lapu-Lapu City. These two projects are 81 percent and 61 percent complete, respectively.

Two isolation facilities worth P26 million for positive asymptomatic personnel of the DPWH 7 inside its compound at the South Road Properties are also eyed to be finished by Aug. 17. The off-site dormitories for the medical personnel inside the DPWH 7 compound with a budget of P42 million are also set to be completed by Aug. 20.

The temporary conversion of the evacuation center in Barangay Apas, Cebu City into a quarantine facility is also expected to be finished by Aug. 17. The P3.5 million project can house 52 beds.

Other projects include the repair of the Women’s Center in Sitio Sudlon, Barangay Lahug, Cebu City for the provincial police personnel, which is 90 percent complete; the isolation facility for patients and dormitory for medical personnel in the Mactan-Cebu International Airport compound in Lapu-Lapu City, which are 50 percent and 82 percent complete, respectively; the isolation facility in the Cebu North Bus Terminal compound in Barangay Subangdaku, Mandaue City worth P15 million, which is 41 percent done and expected to be completed by Aug. 23.

All of the projects are funded by the DPWH.

Tabacon said their office is drafting a memorandum of agreement with the Department of the Interior and Local Government and the Department of Health. The DPWH 7 wants that after these facilities are completed, the operations, including the maintenance of water and electricity, will be assumed by the local government units. (WBS)