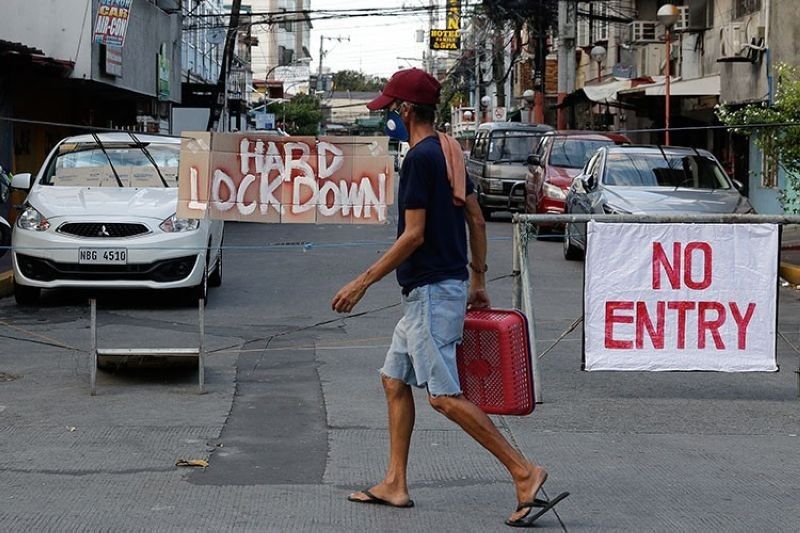 MANILA. The economy was almost at a standstill in April and May 2020, when most local government units imposed lockdowns to stop the spread of the novel coronavirus. (File Photo)

(UPDATED) The Philippine economy technically sank into a recession after gross domestic product (GDP) shrank for a second consecutive quarter.

The Philippine Statistics Authority (PSA) on Thursday, August 6, 2020, said GDP growth rate plunged by 16.5 percent in the second quarter, when the National Capital Region and other key urban centers went into lockdown in an attempt to contain the coronavirus disease 2019 (Covid) pandemic.

The PSA said this is the lowest recorded quarterly growth starting the 1981 series.

A technical recession happens when economic output contracts for two consecutive quarters. In the first quarter of 2020, GDP fell into negative territory with a growth of -0.7 percent.

This brought GDP growth in the first half of 2020 to -9.0 percent, which Finance Secretary Carlos Dominguez III said places the Philippines "in the middle" among its credit rating peers.

In a press conference after the PSA's announcement, Dominguez said Mexico and Italy recorded steeper declines of 10.2 percent and 11.6 percent, respectively.

The Philippines, however, lagged behind credit rating peers Indonesia and Thailand, which contracted by 1.2 percent and 6.5 percent, respectively.

Malaysia and Singapore also performed better, with their GDP falling by 3.9 percent and 6.5 percent, respectively, in the first half.

Only Vietnam registered a positive GDP growth of 2.1 percent for the same period.

In a statement Thursday, the PSA said the industry and services sectors contracted by 22.9 percent and 15.8 percent, respectively, in the second quarter (April to June) of 2020.

Agriculture grew by a minimal 1.6 percent, which was not enough to pull up GDP, or the sum of goods and services produced in the country.

Quarter-on-quarter, the agriculture sector posted a growth of 1.2 percent. Industry and services both declined 21.7 percent and 14.5 percent, respectively.

Net Primary Income or NPI from the Rest of the World and Gross National Income both declined by 22 percent and 17 percent, respectively.

Per capita GDP, per capita GNI, and per capita HFCE growth rates also declined by 17.6 percent, 18.1 percent, and 16.7 percent, respectively.

Acting Socioeconomic Planning Secretary Karl Kendrick Chua said household consumption and private sector investment, which drove growth in the past, significantly declined given the closure of businesses and the loss of income when local government units (LGU) in key areas imposed an enhanced community quarantine (ECQ).

President Rodrigo Duterte first imposed ECQ on Luzon, where more than half of the Philippine population resides and which accounts for at least 70 percent of the country's output, in mid-March. Key growth areas like Cebu, Iloilo and Davao followed.

Chua said the decision to impose ECQ "is worth the lives saved".

"It prevented an estimated 1.3 to 3.5 million cases, of which an estimated 68,000 severe and critical cases at the peak day would have overwhelmed our healthcare system. More importantly, some 59,000 to 171,000 lives were saved," Chua said.

"However, this has come at a great cost to the economy as the ECQ shut down around 75 percent of the economy," he added,

Under ECQ, public transport systems were suspended and businesses were temporarily closed except those engaged in essential goods and services.

The Philippine economy also contracted in 1984 and 1985, with full year growth estimates of -7.3 percent as the country suffered from a political upheaval that led to the People Power Revolution.

Philippine GDP also declined by 0.5 percent in 1991, largely due to an energy crisis, and in 1998 due to the Asian financial crisis. (Marites Villamor-Ilano/SunStar Philippines)