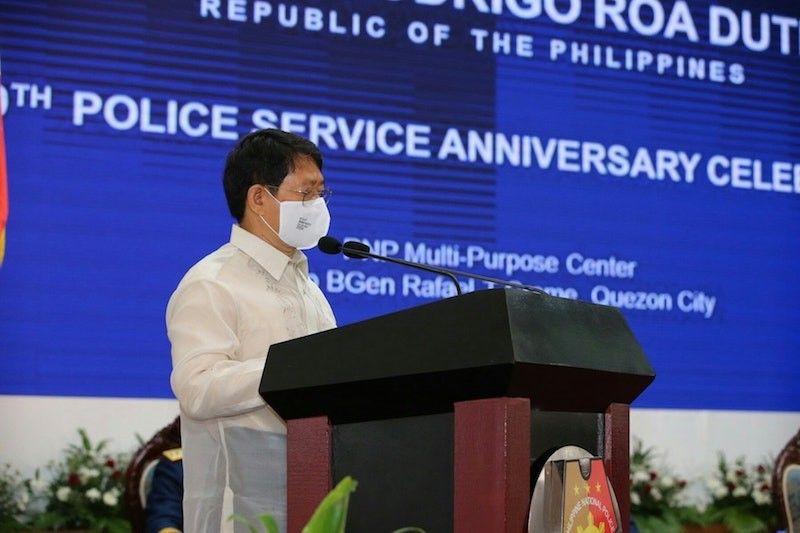 DEPARTMENT of the Interior and Local Government (DILG) Secretary Eduardo Año on Thursday, August 6, 2020, urged the Philippine National Police (PNP) to strengthen efforts to regain the confidence and trust of the public.

During his speech at the 119th Police Service anniversary, Año said criticisms against the police spread faster on social media than the PNP’s accomplishments.

"Thus we need to work even harder to alter this perception and improve the image on all our personnel... Nawa'y maging simbolo kayo ng husay, dangal at kabutihan," he added.

Año urged the PNP leadership to further beef up its internal cleansing efforts to weed out erring policemen who tarnish the image of those who are honest.

"Our efforts are already gaining momentum and we will not stop until every scalawag is removed from our ranks. Hence, we must be unyielding in our internal cleansing drive and by employing measures that beef up our character and caliber, we will be able to build a reputable and formidable police force trusted and well-respected by the Filipino people," he said.

He added that the goal is for the public to equate the presence of cops to a feeling of security and safety.

PNP Chief Archie Gamboa, for his part, said the PNP’s strengthened internal cleansing is being realized through the Revitalized Internal Cleansing Program that utilizes a holistic approach that covers punitive, restorative, and preventive strategies that aim to discipline, correct, and set an example to the police force with an end goal of elevating their service reputation and to eventually gain the trust of the public.

“We set sail in restoring the image of the PNP into one that would portray the police officer as a trustworthy and respectable public servant in the eyes of the people,” he said.

“As the father of our organization, empowering our people has become my top priority believing that human resource is the most important resource of the PNP. To fully realize this noble goal, key initiatives were decisively implemented. We have strengthened our human resources by beefing up the number of personnel through continuous recruitment,” he added.

He also boasted of the PNP’s resolve and capability to enforce the law against high value criminals with the increase in the arrest of most wanted persons at the different levels nationwide.

He mentioned former congressman and cult leader Ruben Ecleo Jr., who was in hiding for 14 years.

Ecleo was convicted of graft and corruption as well as parricide over the murder of his wife.

Gamboa said that under his watch, anti-illegal drug operations from October 14, 2019 to August 1, 2020 involved a total of 41,972 conducted operations, arrest of 62,342 drug suspects, surrender of 3,293 personalities, and the seizure of a total of 2.2 million grams (roughly 2 tons) of methamphetamine hydrochloride (shabu) with a total Dangerous Drug Board’s value of P15.379 billion.

In the fight against terrorism, Gamboa said 476 local terrorists have surrendered to the PNP while 1,669 assorted firearms were confiscated and 85 terrorism members were killed in gunfights with the police.

The Police Service anniversary is in commemoration of the establishment of the Philippine Constabulary, which was the country's first insular police force. (SunStar Philippines)