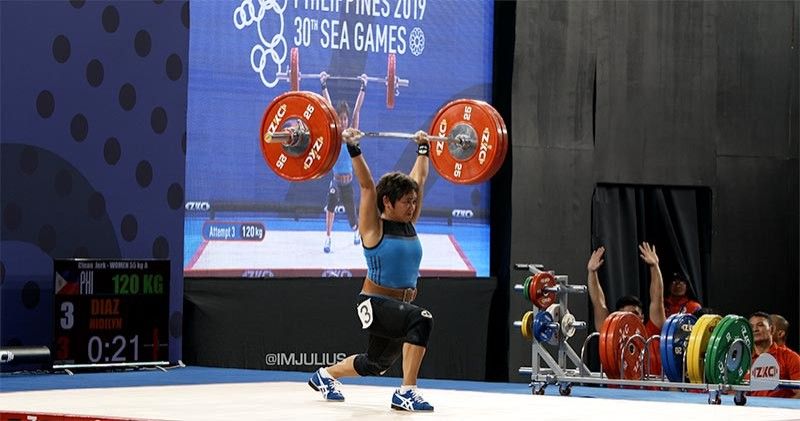 WITHOUT seeing other competitors, Hidilyn Diaz only competed against herself and she was surprised to learn about her victory in the recently concluded 2020 Oceania Weightlifting Federation Eleiko Email International Lifters Tournament through her friends via Zoom.

She said winning the tournament was far from her mind as it was an email competition and she played in 59 kgs event, which has noted strong lifters.

"Yes sobrang thrill at the same time di na ko umasa kasi nga alam kong dehado ako. Ang sa akin lang masaya na ako na makapag-perform ng mabuti (It was thrilling at the same time I thought I was at a disadvantage. I am happy that I performed well)," she told this writer in a Facebook chat interview Tuesday, August 4.

Her joy stemmed from the fact that she was able to compete again after how many months of training, which was geared towards her supposed Tokyo 2020 Olympic qualifying bid.

She added, "Na-boost morale ko kasi malaman ko san na lakas ko at masasabi ko na di nasayang training ko during quarantine. For how many months din po kasi walang laro at puro training lang medyo tinatanong ko na kung worth it pa ba ang ginagawa ko sa training. Ang maganda dito naka-max out ako at nakita ko san na lakas ko (The win boosted my morale and gave me gauge of my strength. My quarantine training paid off. I began to ask if what I had been doing was still worth it since there was no competition for how many months and all I did was train)."

The email competition, where she submitted a total of 216 kilograms in her video entry, was different from an actual live competition. "Mahirap pag-live ang laro sa America so meaning madaling araw ako magbubuhat so dapat ganun din training ko para condition ako sa laro. Pero same feeling lang naman yung preparation and nerbyos (It's difficult competing in a live event if it's in America as it would mean I will lift early in the morning and I need to also train at the same time. But the preparation and nervousness is the same in both)."

She, however, clarified that she competed not in her standard 55kgs in the email contest as she no longer had time to drop weight and since she was not competing for an Olympic spot.

The Putrajaya weightlifting team in Malaysia cheered for her while her entry lift was being recorded.

But Diaz's prevailing goal is to win another spot in the Tokyo Olympics.

She continues to train daily except Sundays and she attends online classes at the College of St. Benilde in the mornings.

Her team has been stranded in Malaysia for about five months now due to the coronavirus disease (Covid-19) pandemic. Thus, the anxiety and uncertainty of the situation as well as the postponement of her sixth and final Olympic qualifying event also tested her resolve, patience and character.

"Di ko kaya siguro kung ako lang mag-isa good thing di ako iniwan ng TeamHD. May session ako parati kay Dr. Karen (I would have not survived if I was alone but TeamHD was with me all the time and I always have sessions with Dr. Karen)," she said.

She was pertaining to Dr. Karen Trinidad, a consultant psychologist of the Philippine Sports Commission (PSC), who has helped her manage her stress and anxiety while her training team was stranded for five months now.