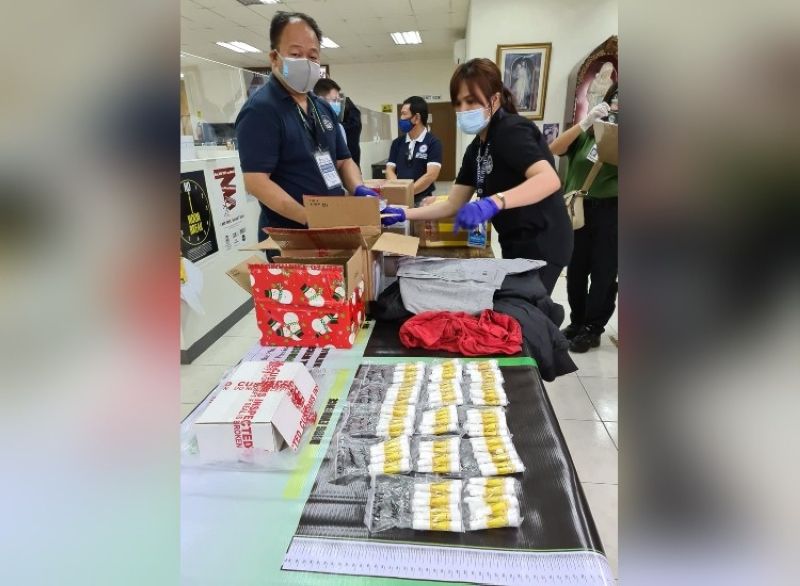 ILLEGAL DRUGS. Bureau of Customs Port of Clark personnel sort out the intercepted P2.2 million worth of marijuana, kush, CBD oil and other illegal drugs coming from other countries and being shipped to Clark. (Photo by Chris Navarro)

CLARK FREEPORT -- Some P2.2 million worth of assorted illegal drugs, mostly byproducts of cannabis such as Kush and cannabidiol (CBD) oil and other paraphernalia believed to be shipped from Europe and the US, were intercepted in separate occasions late July by agents of the Bureau of Customs (BOC) in this freeport, the Philippine Drug Enforcement Agency (PDEA) announced Wednesday, August 5, 2020.

The contrabands were neatly stuffed in 10 small balikabayan boxes, carrying different kinds of illegal drugs and other contrabands and were consigned to different persons in Tarlac, Cavite, and Quezon City, which PDEA agents said are fictitious identities and addresses.

"We have sent agents to places where the parcels are addressed but we failed to locate them. We also invited the consignees to get their packages but no one came forward," said Joseph Samson, provincial director of PDEA-Pampanga during a press conference held at the BOC Port of Clark.

Samson said the illegal drugs originated from Germany, Canada, Sweden, France and Los Angeles California, USA. The items were shipped through a courier.

"Shipment of illegal drugs did not stop despite pandemic. And we also strengthen anti-illegal drugs campaign in different ports across the country," said PDEA Assistant Regional Director Agnes Mandap.

She attributed the latest haul of prohibited substances to BoC Port of Clark for its vigilance and quick actions against the smuggling of unlawful items.

The parcels were carrying bags of gummies made of cannabis, boxes of inhalers with hemp CBD oil, e-liquid pods menthol, rolling papers in candy wrappers, vape cartridges with CBD oil, bags of Kush and other illegal drugs paraphernalia.

Port of Clark District Collector Ruby Claudia Alameda said a large number of illegal drugs have been seized at Clark amounting to more than P13 million for this year alone.

The shipments, Alameda said, were subjected for profiling after we noticed in the manifest that these parcels came from countries being monitored as sources of prohibited drugs.

"This serves as a warning to all ports abroad or any ports in the globe... the port of Clark is very strict especially with regards to the apprehension of illegal drugs. Our technology is at par with other countries, so it's difficult to conceal contraband and other illegal items," said Alameda.

The BOC Port of Clark district collector also appealed to enterprising individuals abroad to stop sending dangerous drugs, saying “because your parcels cannot escape and our personnel is trained for this.”

The confiscated items were turned over to PDEA-Central Luzon for custody.