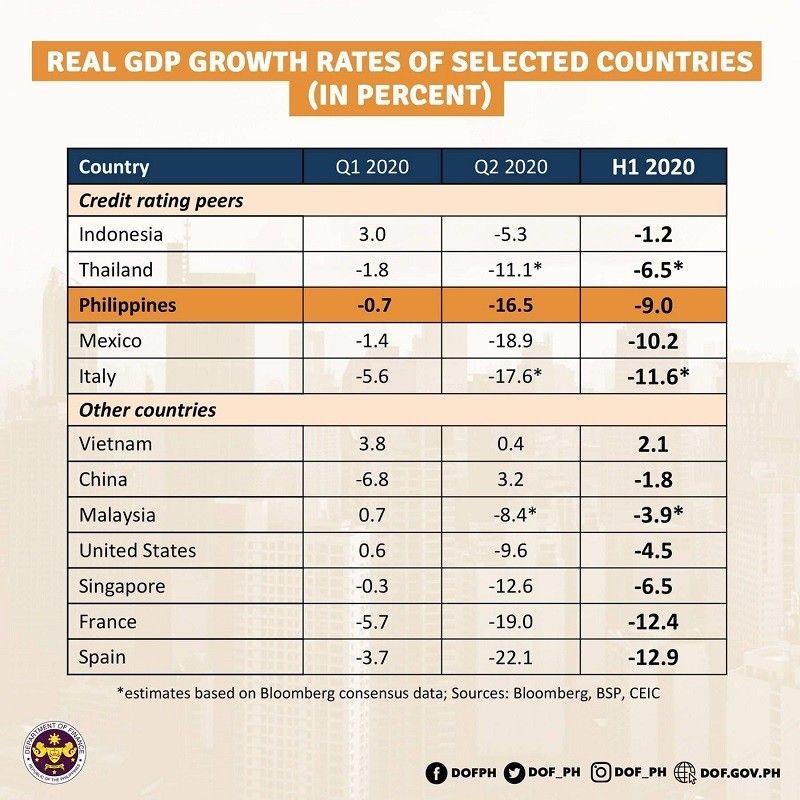 THE country’s economic managers have showed that the Philippines’ economic performance for the first half of the year falls roughly within the middle among its credit-rating peers, at negative nine percent.

Finance Secretary Carlos Dominguez said, “Although the first semester figures underscore the challenges ahead of us, if we work together to shore up consumer confidence, we will deliver better economic outcomes in the final half of this year.”

“Now, we know more about this disease and how it is transmitted. We now know that, with the right behaviors, individuals, businesses and communities have significant control over the risks of infection.

The pandemic we are fighting is no longer ‘novel,’” he said.

Dominguez also said the government is waging war on Covid-19 on all fronts.

“Our strategy has three main components: our fiscal stimulus, a re-calibrated budget for 2021, and continued massive investment in infrastructure.”

The Philippine economy contracted by 16.5 percent in the second quarter of 2020, bringing first semester contraction to nine percent. Household consumption and private sector investment, which drove growth in the past, have significantly declined given the closure of businesses and the loss of income during the enhanced community quarantine.

“Without doubt, the pandemic and its adverse economic impact are testing the economy like never before. But unlike past crises, the Philippines is now in a much stronger position to address the crisis,” said Acting Socioeconomic Planning Secretary Karl Kendrick Chua in a statement.

While the decline in the gross domestic product is huge, Chua said the country is beginning to see signs of recovery.