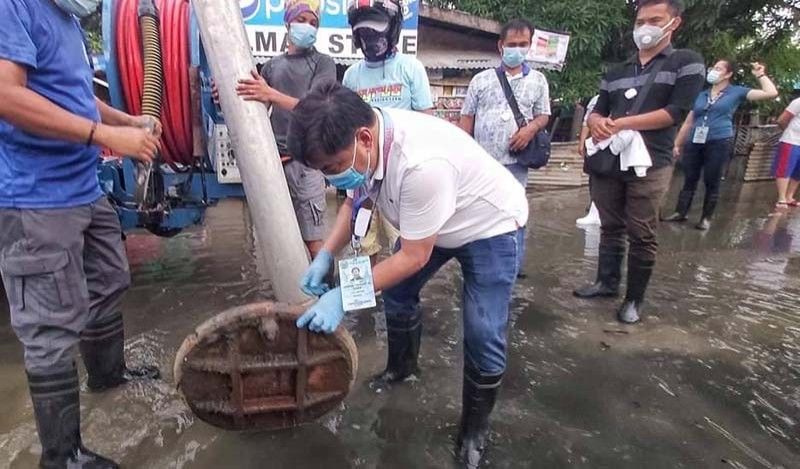 DECLOGGING. Lapu-Lapu City Mayor Junard Chan visits the flood-prone sitios of Tungdon and Tanke in Brgy. Basak, together with the City Disaster Risk Reduction Management Offices of Lapu-Lapu and Mandaue. Chan leads the declogging of the drainage during the visit. / Alan Tangcawan

THE Lapu-Lapu City Government plans to build another drainage system in Barangay Basak to prevent the area especially in two sitios from flooding during rainy days.

The two sitios were identified as Sitio Tungdon and Tanke wherein residents have been beset by heavy flooding these past few days.

The mayor said the government has no funds to build a drainage system yet but he is hopeful that his office can take immediate action to solve this problem.

He is set to meet with the City Engineering Office to determine the project cost.

The mayor found out during his visit to the area that the reason the drainage system failed is that it is connected to the sea.

Whenever it is high tide, water flows out of the manhole, resulting in flooding because the water channel in the original drainage is also transferred to another small drainage.

Currently, the government’s priority is to pump and absorb water that has been stored in the area to reduce water drainage.

One of the culprits of the problem is the contractor working on a fishpond in the area that is allegedly owned by the Department of Environment and Natural Resources (DENR) but is currently being rented.

“The fishpond which they applied for, they filled it with limestone without the city’s permission so now the fishpond is full of filling materials,” Chan said.

The mayor believes that instead of a fishpond, a subdivision is operating in the area as it is being reclaimed.

There are also fences built in the area without fencing permits that aggravate the flooding in the area.

The mayor plans to write DENR Secretary Roy Cimatu about the problem.

“We have called the attention of the one who leased the fishpond area because the application was for a fishpond, not dry land,” Chan said. (GCM / MMC)