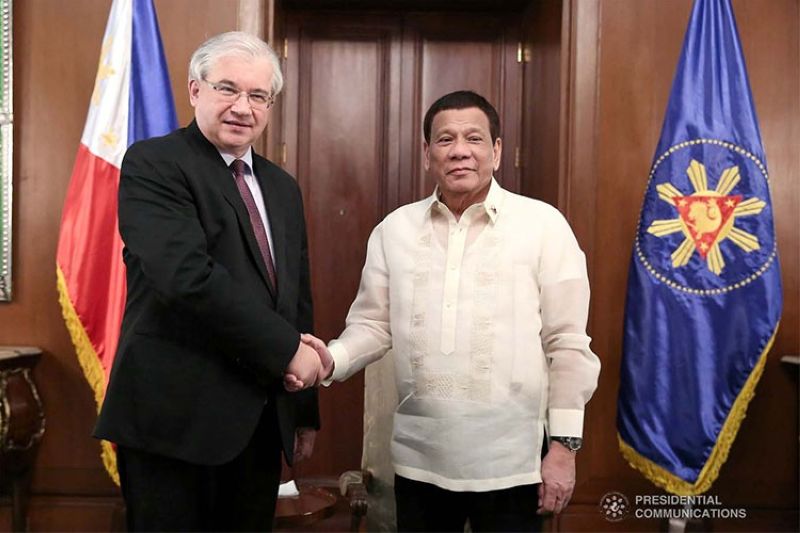 MANILA. President Rodrigo Duterte and Russian Ambassador to the Philippines Igor Khovaev pose for posterity as the latter paid a courtesy call on the President at the Malacañan Palace on January 31, 2019. (Presidential Photo)

A VACCINE against the coronavirus disease (Covid-19) has been developed in Russia and its Government, in a proposed cooperation to the Philippines, is ready to supply the Philippines with it.

Russian Ambassador to the Philippines Igor Khovaev in a virtual press conference on Friday, Aug. 7, 2020, said the proposed cooperation was submitted to the Philippine Government through the Department of Foreign Affairs this week.

He said Russia is awaiting the response of the Philippine Government.

Khovaev announced that procedures for the administrative approval of the “safe and effective” Covid-19 vaccine have all been set by the middle of August 2020.

The Ambassador said at least 20 countries, like India and some European countries, have expressed interest in the vaccine and officially confirmed their cooperation.

Khovaev, was unclear on the kind of cooperation proposed by Russia to the 20 countries.

However, in its proposed cooperation to the Philippines, three areas were identified: Cooperation through clinical trials if the Philippine Government finds it necessary, supply of the vaccine, and local

production of the vaccine in the Philippines.

“We, Russians, are ready to closely cooperate with partners in order to defeat Covid-19,” Khovaev said.

Khovaev said this is a unique opportunity to substantially improve the bilateral partnership of Russia and the Philippines.

The vaccine was created by the Moscow-based Gamaleya National Research Institute of Epidemiology and Microbiology and financed by the Russian Direct Investment Fund (RDIF).

According to the RDIF, the sovereign wealth fund of Russia, the vaccine’s distinct characteristic is its ability to reduce the time needed for a person to develop immunity from

The vaccine’s first clinical trials were conducted in the middle of June 2020.

Massive production is expected to begin in Sept. 2020, the RDIF said.

The preclinical studies on monkeys and hamsters confirm the effectiveness and safety of the vaccine, RDIF added.

Khovaev said the vaccine was tested on volunteers and even on the CEO of the RDIF, his wife and parents. All of them are reportedly doing well.

He said the development of the vaccine was quick because it is a modified version of a vaccine used to fight other diseases.

He added that Russian scientists also developed vaccines for Ebola and MERS-CoV.

Meanwhile, the World Health Organization (WHO) in a press briefing said there are general guidelines, regulations, and rules on how to deal with the safe development of vaccines.

According to WHO’s guidelines, vaccines have to go through three-phase trials before they could be licensed.

The Russian vaccine is still working on the third phase of its trials.