Minus stars, Nets clinch playoff spot in victory over Kings 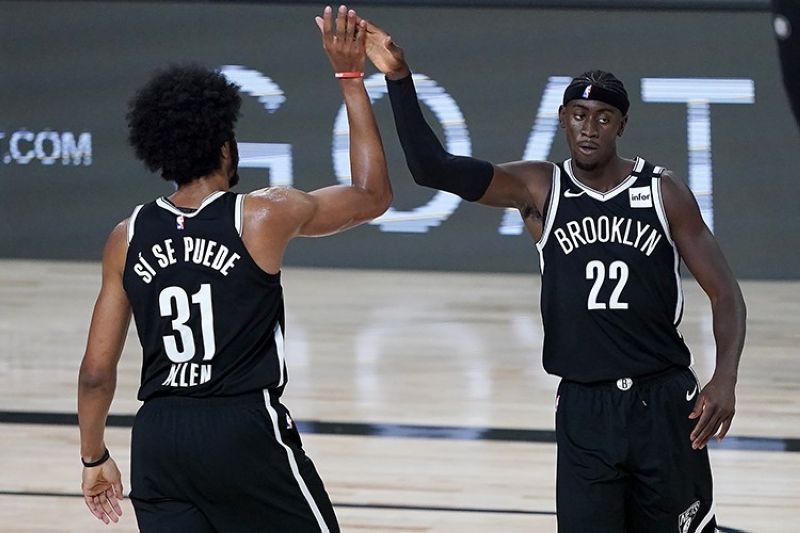 Brooklyn Nets' Jarrett Allen (31) and Caris LeVert (22) react after a play against the Sacramento Kings during the first half of an NBA basketball game Friday, Aug. 7, 2020 in Lake Buena Vista, Fla. (AP Photo)

The surprising Nets came to the bubble without stars Kevin Durant and Kyrie Irving but continued to display plenty of fight, improving to 3-2 since coming to Florida. Joe Harris added 21 points, shooting 8 of 11 from the field, including 5 of 7 from 3-point range.

The Nets had a 78-62 lead midway through the third quarter but Bogdan Bogdanovic responded with five quick points to spark a Kings rally. Sacramento pulled within 80-76 before Garrett Temple's 3-pointer got Brooklyn back on track.

Brooklyn pushed its advantage to 93-82 by the end of the third and kept a comfortable lead throughout the fourth.

The Kings were one day removed from an impressive 140-125 win over the New Orleans Pelicans but couldn't string together two wins and fell further behind in a crowded race for the final Western Conference playoff spot. Sacramento is 1-4 in the bubble.

Bogdanovic led the Kings with 27 points after scoring a career-high 35 against the Pelicans on Thursday. De'Aaron Fox added 21 and Buddy Hield added 17.

LeVert scored 19 points in the first half and added five assists, four rebounds and two steals. Sacramento led 27-24 after one quarter but Brooklyn rallied with 39 points in the second quarter to take a 63-53 halftime lead.

Kings: G/F Kent Bazemore (left calf soreness) and F Marvin Bagley III (sprained foot) did not play. ... F Richaun Holmes (hip soreness) was questionable but started. He played 11 minutes in the first half, contributing one point and five rebounds, but did not play in the second half because of the hip issues. (AP)