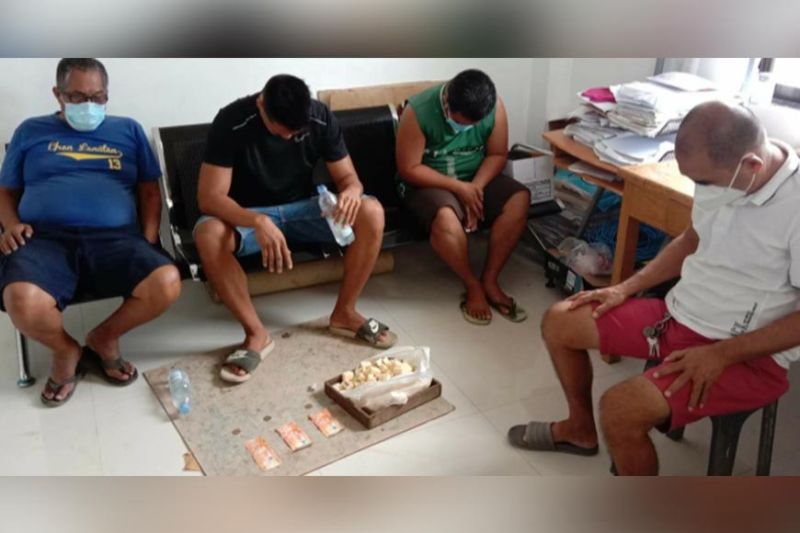 FOUR men, including a village chief, were arrested by local police after they were caught playing mahjong in Barangay Poblacion, Argao on Saturday, Aug. 8, 2020.

The village chief who was arrested by police was identified as Langtad Barangay Captain Joel Ramos Saragena, 51.

Confiscated from the four was a set of mahjong tiles, two dice and P90 worth of gambling proceeds.

Dabon said he and his men immediately responded and upon checking the house, they found the four, including Saragena, playing mahjong at a kiosk.

“Cipriano (Lanutan) facilitated the game. It just turned out that the barangay captain was there. They were playing in Cipriano’s kiosk, which was just outside the house and can even be seen by people passing by,” Dabon said in Cebuano.

Gatherings are also prohibited during MGCQ, he added.

He urged the public, including elected officials, to follow the quarantine protocols set by the national and local governments.

Saragena and his companions could be facing charges for violating Presidential Decree 1602 which penalizes gambling.

Saragena, however, could face additional charges, especially since he is a public official.

Saragena was not the first barangay official from Argao town to be arrested for breaking quarantine protocol.

Last Thursday, Aug. 6, police arrested Barangay Canbanua Councilor Edilor Salomere and barangay treasurer Jimster Bajenting along with three others after they were caught holding an illegal cockfight in their barangay.

In earlier interviews, Cebu Gov. Gwendolyn Garcia had threatened to sue elected officials under her jurisdiction who are caught holding illegal gambling activities even during the pandemic. (AYB, JKV)