Virus cases average over 4,000 a day in early August 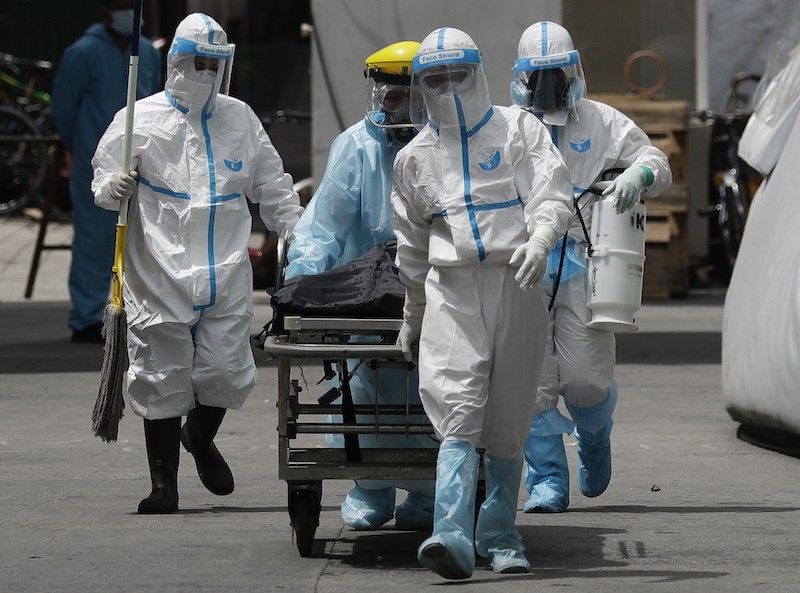 MANILA. Health workers wearing protective suits transport a corpse at a hospital in Manila on Thursday, Aug. 6, 2020. The capital and outlying provinces returned to another lockdown after medical groups warned that the country was waging “a losing battle” against the coronavirus amid an alarming surge in infections. (AP)

AN ADDITIONAL 3,109 cases of coronavirus infection were reported Sunday, August 9, 2020, bringing the total case count in the country to 129,913.

The DOH also reported that an additional 654 persons have recovered from coronavirus disease 2019 (Covid-19), increasing the total recoveries to 67,673 as of Sunday.

An additional 61 deaths were reported, the highest in three weeks although four of these mortalities occurred in May, six in June, 34 in July and only 17 in August. This raised the death toll from Covid-19 to 2,270.

Of the 129,913 total cases Sunday, 59,970 were active, referring to patients who are still in the hospitals or in quarantine. Eighty-one duplicates were removed from the total.

The proportion of patients in critical condition increased to 0.6 percent (six out of every 1,000) while those in severe condition comprised 0.7 percent (seven of every 1,000). More than nine of every 10 patients, or 91.2 percent, experienced mild symptoms while the rest did not develop symptoms.

The National Capital Region (NCR), which has the biggest population among the regions at around 12 million, continued to record the highest number of new cases at 1,700 Sunday.

The provinces with the highest number of new cases were Laguna with 169, Cebu with 114, Rizal with 98 and Cavite with 93.

More than half of the mortalities, or 36, were from Central Visayas, followed by NCR with 16.

Of the 36 deaths from Central Visayas Sunday, six happened in August, 25 in July and five in June.

As of August 8, DOH said more than 1.6 million individuals have been tested for Sars-CoV-2, the virus that causes Covid-19.

There are 79 licensed reverse transcription polymerase chain reaction (RT-PCR) laboratories and 24 GeneXpert laboratories in the country.

Worldwide, the virus has infected more than 19 million. Deaths from Covid-19 reached 716,075 as of August 8, according to the World Health Organization. (Marites Villamor-Ilano/SunStar Philippines)