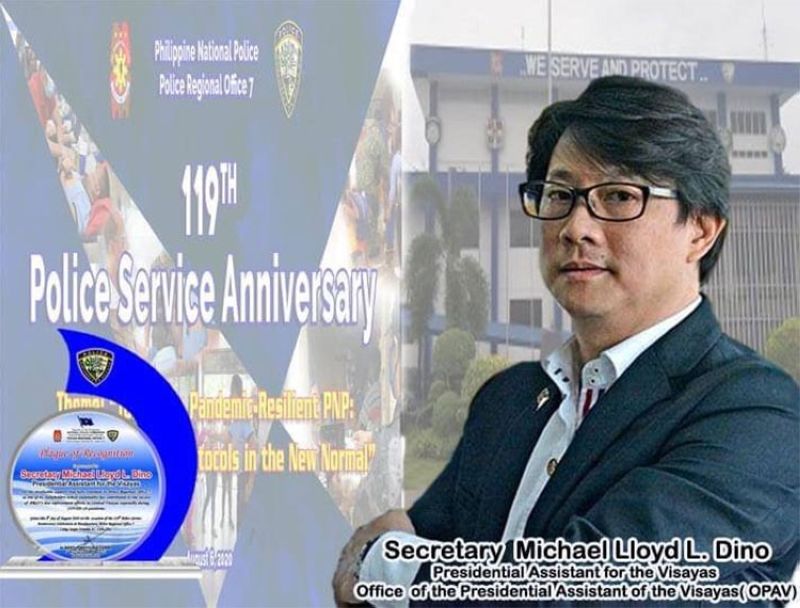 THE Police Regional Office (PRO)-Central Visayas has given Secretary Michael Lloyd Dino, Presidential Assistant for the Visayas, a plaque of recognition for his "invaluable support" to the agency during the coronavirus disease (Covid-19) pandemic.

Last August 6, during the 119th Police Service Anniversary Celebration held simultaneously in the different office of the Philippine National Police in the country, PRO-Central Visayas handed its award to Dino.

"Plaque of recognition is presented to Secretary Michael Lloyd Dino for the invaluable support that (he) has extended to Police Regional Office 7, as one of its stakeholders which, undeniably, has contributed to the success of PRO 7's law enforcement efforts in Central Visayas especially during Covid-19 pandemic," reads the award.

"This is the organization's way of rewarding those who toil in their jobs with passion and commitment despite the odds faced in policing and community service," he said.

He added that this year's theme, "Towards a Pandemic Resilient PNP," is reflective of the current situation that is happening in the country.

"Though our organization has flawlessly shifted with the changes of governance, policies, and generation but this pandemic has totally astounded us unprepared yet our PNP has faced it head on," said Ferro.

He added that the PRO 7 Amigo cops "battled the unseen foe with courage and bravery despite the threat of the deadly respiratory disease."

The director also described the police officers of the PRO-Central Visayas as resilient in battling Covid-19 and in implementing quarantine protocols.

"Adapting to the new normal has created awareness and giving more value to human life. By strictly adhering to the health protocols it will save lives thus delaying the spread of Covid-19 and preventing death among the health compromised," added Ferro.

Meanwhile, Dino thanked PRO-Central Visayas and Ferro for the recognition given to him.

Dino also promised to continue his support to the police in the region with the ongoing battle against Covid-19.

"This is the time where we need to stand as one, hand in hand in helping each other to heal as one," said Dino.