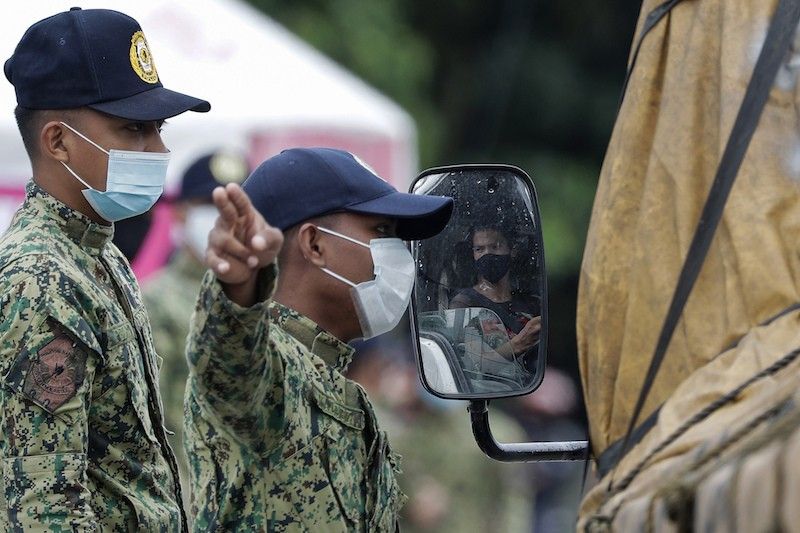 MANILA. Police officers instruct a driver as they implement stricter quarantine measures to curb the spread of Covid-19 at the border of Bulacan province and Caloocan City on Monday Aug. 10, 2020. (AP)

THE Department of Health (DOH) on Monday, August 10, 2020, reported 6,958 additional cases of coronavirus infection, a new record high in the country’s daily tally.

New cases from the National Capital Region (NCR) also hit a new single-day high of 4,163, about 60 percent of the additional cases reported Monday.

The DOH case bulletin, which was issued at 8 p.m. Monday instead of the usual 4 p.m. schedule because of a “system error”, reported the total case count at 136,638.

Of the total, 66,186 were active, referring to patients who are still in the hospitals or in quarantine. DOH said 233 duplicates were removed from the case count.

The agency also reported 633 additional patients who have recovered from coronavirus disease 2019 (Covid-19), increasing the total recoveries to 68,159.

Monday’s new cases exceeded the 6,352 cases reported on August 4, which was the highest number of cases in a day that DOH has recorded since confirming Patient No. 1 on January 30.

Based on the cumulative cases recorded by the DOH, 43,284 were added to case count from August 1 to 10, raising the daily average to more than 4,328 a day in the month of August alone.

The provinces with the highest number of cases Monday were Laguna with 400, Rizal with 363, Cavite with 312 and Bulacan with 178.

These provinces, together with the NCR, were reverted to modified enhanced community quarantine on August 4 in a bid to curb the surge in infections.

NCR, or Metro Manila, is the country’s biggest region with an estimated population of 12 million.

Of the 24 additional deaths, six occurred in August, 11 in July, four in June, one in May and two in April.

Nine of these mortalities were from Calabarzon, six from NCR, four from Central Visayas, three from Western Visayas, and one each from Ilocos and Zamboanga Peninsula. (Marites Villamor-Ilano/SunStar Philippines)