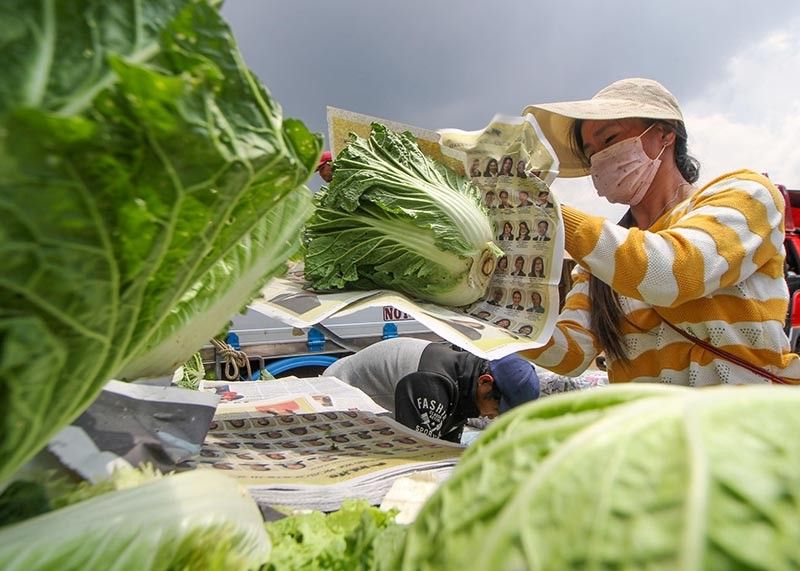 BAGUIO. Vegetable traders, packers and dealers are adapting to the new normal, which dictates the wearing of personal protective gear at work. (Jean Nicole Cortes)

SAGADA produce has been sold in Manila markets since the quarantine with the help of advocates.

Sustainable Sagada, a project conceptualized during the onset of the Covid-19 pandemic, has given farmers hope when there seemed to be no avenues to sell.

Tracey Santiago, founder of the movement to bring Sagada fresh produce to Manila, said: "Eliminating the middle man will be very difficult and almost impossible but choosing the middle man who understands fair trade and has a good sense of compassion for farmers will be a better option or should be the only option."

Close to 25 tons of vegetables has so far been brought from Sagada with produce from nearby Bauko town included.

Sagada Mayor James Pooten Jr. coordinated with Santiago to help move the products from Sagada to Manila with the first trial run delivering 5,260 kilograms on April 17 in coordination with the local agriculture office and the Department of Agriculture.

Sagada's Municipal Council also expressed its gratitude to all the players in this sustainable endeavor and asked to continue as it inspires many farmers and entrepreneurs who are benefitting from it.

"When we started bringing down vegetables and coffee from Sagada at the height of the ECQ, we were able to buy and sell 5.3 tons or two truckloads of produce. We were overwhelmed with all the orders and support of people all over the quarantined metro. The call was to support farmers move their produce so it won't be thrown to waste. Then we thought about people who lost their jobs who could help us pack and the drivers who could help us deliver the packed goods to each household. We started with a very good run," Santiago said.

"For the past four months, we consistently did this and tried to improve systems that could simplify operations and maximize sales. From seven kinds of vegetables on our first list to 60 items on our eighth run. Aside from farmers, more locals asked for help. There were meat producers, jam and wine makers, bakers, beekeepers and even potters. For every run, there was someone new who was able to load his or her produce to the truck," Santigao added.

Sustainable Sagada sells fresh produce, smoked meats, sausages, pottery, fruit preserves and baked goods from the community at a low, affordable price, which has created a following in the lowlands with delivery at their doorsteps included in the service, making the purchase seamless and safe.

Coordination from the Department of Agriculture Municipal Agriculturist of Sagada, Maria Ap-apid, has facilitated the safe transport of the produce, as well as sourcing out farmers to sell their harvests to lowland markets.

As restrictions are slowly being lifted, Santigao said less produce are ordered but found a way to help others in need in Metro Manila and at the same time keep vegetables moving from the highland town.

"There were runs when our total number dwindled and I just find myself uttering a prayer to help me move mountains to increase the numbers. For these produce to move, we needed to look for more consumers. So, I asked myself, who else isn't eating vegetables? Or better yet, who else is no longer eating? The hundreds of locally stranded individuals and homeless families in Baclaran church, the jeepney drivers and displaced lumad children in UP, and so many other people who are in distress because of this crisis," said Santiago.

Sustainable Sagada has been at the forefront in helping soup kitchens feed the hungry and give the homeless health food, as well as distribute fresh vegetables to jeepney drivers, pedicab drivers, kutseros, vendors, and the residential neighborhoods of Intramuros through donations that purchase the vegetables to be given to beneficiaries.

For the ninth run of Sustainable Sagada, the project intends to raise at least two tons of assorted vegetables or equivalent to 400 five kilo vegetable packs.

Pledges are set at P200, which will be able to purchase fresh highland vegetables packed with green cabbage, sayote, tomatoes, cucumber, red and green bell peppers.

"Each donation will also help us support farmers from Sagada by buying their produce at a higher price than what other traders are paying them, we intend to keep it going until it gets better and no one is left behind," Santigao said.

Sustainable Sagada is now on its ninth run and will deliver fresh vegetables to the lowlands on August 13.