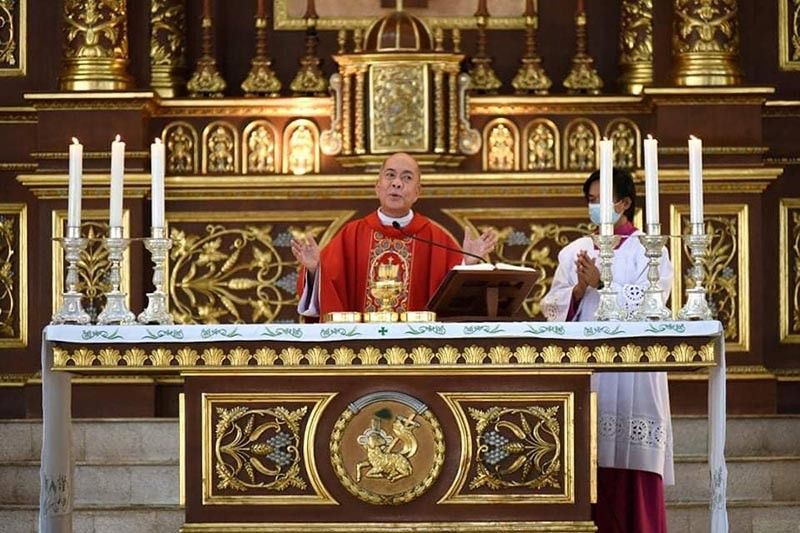 ARCHBISHOP Romulo Valles, who officiated his first public mass on Monday, August 10, since his mild stroke that sent him to the hospital for a month, admitted he was thinking about death while he was still at the hospital.

The archbishop, during his homily, shared that he was supposed to return to presiding public masses on August 15 but Davao City Mayor Sara Duterte-Carpio personally wrote a letter to the Archdiocese requesting him to officiate the Misa Pasasalamat.

Valles, during his opening homily, thanked the mayor, who was also present during the mass, saying Duterte-Carpio personally texted him upon learning of his admission to the hospital.

She thanked the mayor and everyone who prayed for his recovery.

Valles, for the first time, publicly confirmed he was admitted on the evening of May 23 and was discharged on July 6.

"We kept it a secret, and we were quite successful in keeping it," the archbishop said.

He shared his struggle during those times, saying the right portion of his body was totally paralyzed.

"I have to say this, it was no small sickness. I had a stroke, and I thought [there was a great] possibility of dying," Valles admitted.

But he said "prayers, and his excellent doctors" helped him recover.

Valles said he took some rest after being discharged from the hospital. By that time, he was able to walk gradually since his walking ability was affected by stroke.

He also said he is currently adjusting his speech, which is also affected by stroke.

The archbishop was once again visible to the public after he celebrated the Holy Eucharist via livestream from the Bishop's Residence on July 26 during the Feast Day of St. Anne and St. Joachim.

Meanwhile, this year's Misa Pasasalamat has only few attendees compared to the previous years, due to the coronavirus disease (Covid-19) pandemic.

Despite the pandemic, Valles said there is still a reason to celebrate the Kadayawan, which is to thank the Lord for the bountiful blessings the city received for the past years.

"In the midst of this pandemic: no display of fruits, no parades, no visitors, no tourists, but we were able, as Dabawenyos, to say that 'Life is Here.' We are still celebrating Kadayawan," Valles said.

The city's archbishop is taking an indefinite hiatus as Catholic Bishops' Conference of the Philippines (CBCP) president while he is recovering.

Caloocan Bishop Pablo Virgilio David is currently serving as CBCP president, in lieu of Valles, who personally requested him to take over his position while he is recovering. David is the CBCP's vice president.