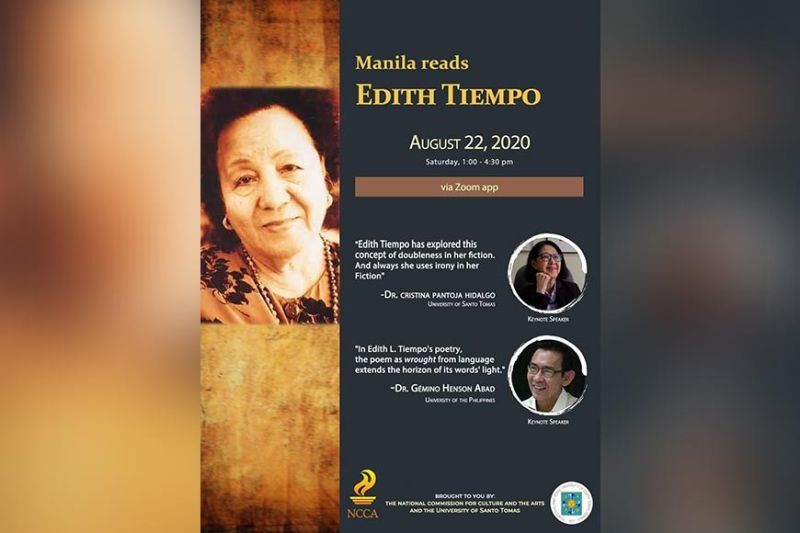 Renowned scholars and literary historians will share their lectures and readings on selected National Artists to the public.

Dr. Hope Sabanpan-Yu, former chair of the NCLA, said the Reading the National Artists for Literature Series was introduced in 2018. It was a simultaneous event that kicked off on April 11, 2018 with “Cebu reads Lazaro Francisco” at the University of San Carlos and “Manila reads Ramon Muzones” at the Ateneo de Manila University.

This year the series will bring to the public events: “Manila reads Edith Tiempo” and “Davao reads Amado Hernandez.”

The late National Artist Edith Tiempo was not only a generous mentor and educator, but she influenced Philippine literature in English with a refined sense of language and expression of Filipino sensibility.

Tiempo authored books of poetry and fiction and is best known for “A Blade of Fern,” “His Native Coast,” “The Alien Corn,” and “The Builder,” to name a few works.

Co-sponsoring the event is the University of Sto. Tomas through its NCLA coordinator, Dr. Joyce Arriola.

The “Davao reads Amado Hernandez” event is scheduled to go online in October with no less than National Artist for Literature, Dr. Virgilio S. Almario, keynoting the event.

The late National Artist Amado Hernandez was a writer and labor leader famous for criticizing the social injustices in the Philippines. He was known for his socio-political novels such as “Ibong Mandaragit,” “Luha ng Buwaya” and “Pili sa Pinili” which provide humanistic insight into the characters who are representative of both the rich and the oppressed.

Hernandez’s poetry covered many subjects and broke the restrictions of traditional patterns of prose, shaped with thought and feeling to bear witness to the Filipino condition.

The panel of speakers who will discuss the works of Hernandez are Dr. Macario Tiu, Dr. Jhoanna Lynn Cruz, Dr. Errol Merquita and Dr. Jay Jomar Quintos. Dr. Agustin Pagusara will perform some of Hernandez’s poetry. Coordinating for the Davao event is Dr. John Bengan of the University of the Philippines-Mindanao.