After Cebu duty, SAF troops off to NCR 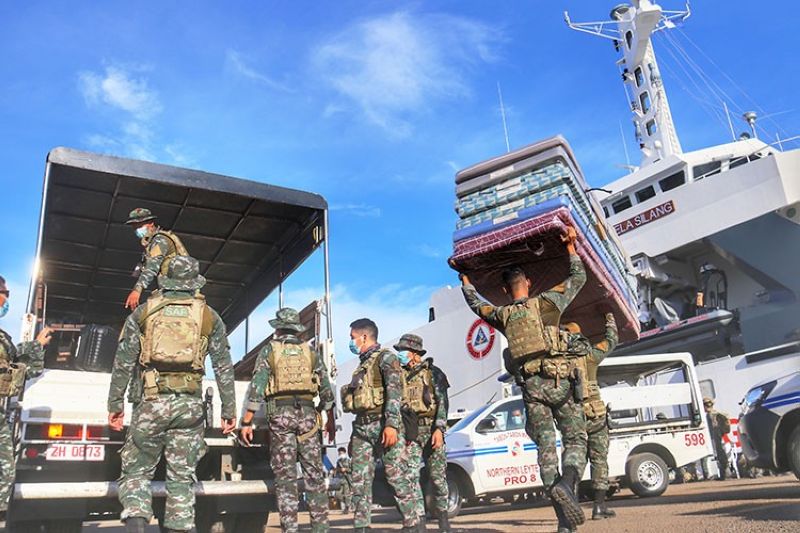 SO LONG, SAF. Members of the Philippine National Police’s Special Action Force load their belongings onto the BRP Gabriela Silang in Pier 1, Cebu City Tuesday, Aug. 11, 2020. They had arrived on June 26, 2020 to help enforce the protocol related to Cebu City’s enhanced community quarantine (ECQ), later modified ECQ, and finally, general community quarantine, under which the city has been placed from Aug. 1 to 15. They departed for the National Capital Region. (Amper Campana)

AFTER spending close to two months in Cebu City to enforce quarantine protocol, 151 members of the Special Action Force (SAF) have been recalled back to Manila.

The 151 SAF members were sent off by the Cebu City Government in a ceremony Tuesday morning, August 11, 2020.

The SAF members, who started their tour of duty in Cebu on June 27, will be recalled to the National Capital Region (NCR) to conduct similar operations against quarantine violators due to the increasing number of Covid-19 cases in Metro Manila.

In his speech, Brigadier Gen. Albert Ignatius Ferro, director of the Police Regional Office-Central Visayas (PRO) 7, said he praised the SAF’s involvement in Cebu City for ensuring that quarantine protocol was observed and enforced, especially in barangays where Covid-19 cases were rampant.

SAF teams were instrumental in ensuring that residents in those barangays were following quarantine protocol.

But Ferro said he was not worried with SAF’s departure from Cebu as they still have a Crisis Response Battalion, composed of 600 police personnel, who will replace them in patrolling the city.

Secretary Roy Cimatu, the Inter-Agency Task Force (IATF)’s chief overseer in the Visayas, likewise praised the SAF for their efforts in Cebu.

“They are a group of professionals and group of discipline personnel and they imparted whatever the orders that they gave them and we are very fortunate that they helped lower cases here. So I have to attribute it openly to them of what they have done here in Cebu City,” Cimatu said.

For his part, Cebu City Mayor Edgardo Labella said he will recognize the 151 SAF members during the city’s 84th Charter Day celebration next year.

“Cebu City is preparing for the recognition during our Cebu City Charter Day, all of those who have extended their help will be acknowledged and recognized by the City Government of Cebu,” Labella said.

Police Lt. Richiel John Comador, one of the SAF members, told reporters that they found no difficulties in their assignments thanks to the Cebuanos’ generosity.

“We see no problem with the people here since they are not as hardheaded as some would say. If we tell them to stay at home, they would do so without any complaints,” Comador said. (AYB, PAC, JKV)