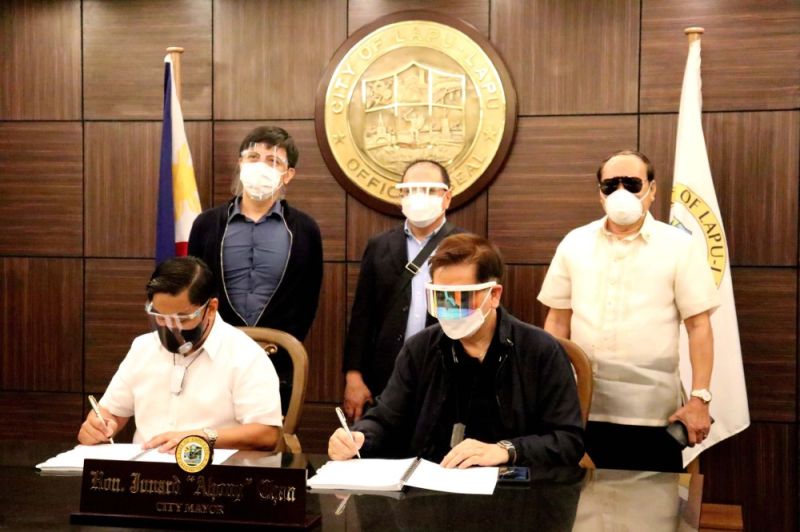 AMID the Covid-19 pandemic, hope shines brightly on the Island of Mactan.

The Lapu-Lapu City Government which has entered into a Joint Venture Agreement (JVA) with reclamation developer Mactan Bluewaters Development Consortium (MBDC) announced the new project will soon solve many of the city’s troubles such as traffic congestion.

The reclamation project that will cover the shores from Barangay Punta Engaño to Barangay Canjulao will also allow the city to acquire additional properties that will spur additional revenues “without spending a single peso,” said Mayor Junard “Ahong” Chan.

Chan signed a memorandum of agreement (MOA) with MBDC on Friday, Aug. 7, 2020 for the reclamation of the 203-hectare area.

“We will put the coastal highway, a 30-meter-wide road there,” the mayor said in Cebuano.

The coastal highway is expected to solve the city’s traffic woes since it will serve as the city’s alternative road.

Another component of the reclamation project, Chan added, is the implementation of a socialized housing project for informal settlers proclaimed by former President Gloria Macapagal-Arroyo years back.

Arroyo had allocated a 25-hectare area for socialized housing in Barangay Canjulao.

“Magamit nato ni, sila’y (developer) mo-develop, sila’y mo-pabarog, sila’y mo-abono, ila tanan (We can use this. They will develop, build, fill the land, do everything), at no cost to the City Government,” said Chan.

He said the reclamation project will be a mixed-use area where there will be space for tourism, commercial, and industrial establishments.

It will also have a park, Chan said.

The mayor plans to have a boardwalk built under the two Mactan bridges and considers as an option, the construction of a new City Hall building in the area once the reclamation project is completed.

“We could either sell our share of the property or develop it,” Chan said.

According to the JVA, 100 hectares will be developed in Punta Engaño by MBDC while the consortium will develop 103 hectares in Canjulao.

The project is seen to boost the tourism assets of Lapu-Lapu City as well as generate thousands of jobs under the public-private partnership.

Chan said he is grateful for the trust of MBDC executives represented by Carlos Gonzalez, its chairman, in pouring a huge investment to build progress in the city through infrastructure and employment.

Once completed, 52 percent of the reclaimed area will be turned over to the City, while the remaining 48 percent will be the developer’s share of the land.

The project which is fully supported by the Lapu-Lapu City Council and already approved by the Philippine Reclamation Authority (PRA) is scheduled to start at the end of this quarter.

“This is the start of our recovery from the damage of the deadly pandemic,” Chan said.